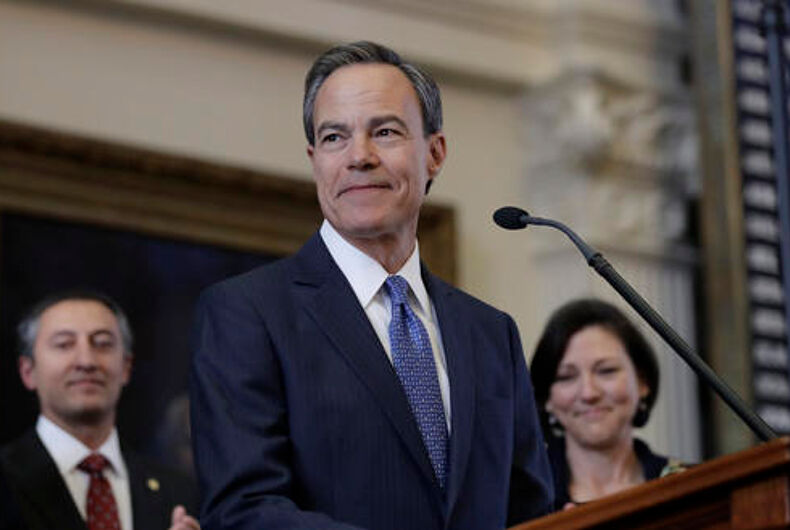 FILE - In this Jan. 10, 2017, file photo, Texas Speaker of the House Joe Straus, R-San Antonio, stands before the opening of the 85th Texas Legislative session in the House chambers at the Texas State Capitol after he was re-elected for a fifth consecutive term in Austin, Texas. Straus has branded as bad for business a Texas proposal barring transgender people from using public restrooms of their choice that's been championed by his state's leading conservatives despite echoing a law that caused upheaval in North Carolina. Photo: (AP Photo/Eric Gay, File)

AUSTIN, Texas (AP) — A proposal barring transgender people in Texas from using the bathroom of their choice is unequivocally bad for business, a powerful state Republican legislator said Wednesday, in defiance of conservative leaders who have applauded the measure amid North Carolina’s economic upheaval due to a similar law.

Texas House Speaker Joe Straus’ comments underscore an escalating ideological battle between the GOP’s traditional business-minded base and further-right grassroots activists in a deeply red state. It’s not just a squabble over civil rights that’ll be laid bare during the 2017 legislative session, where Republicans hold majorities in both chambers, but also on how to deal with as much as $6 billion less to spend on the budget due to slumping oil prices in the nation’s top oil-producing state.

“Many people where I come from get concerned about anything that can slow down the overall job-creating machine,” Straus, a San Antonio Republican, told a gathering of the Texas Association of Business. “I think we should be very careful about doing something that can make Texas less competitive for investment, jobs and the highly skilled workforce needed to compete.”

The speaker’s remarks drew a standing ovation from members of the association, which has suggested the so-called bathroom bill could cost Texas billions in lost revenue and thousands of jobs.

“One way to maintain our economic edge is to send the right signals about who we are,” Straus said.

North Carolina’s law, which went into effect last year, caused corporations, entertainers and NCAA sporting events to leave the state rather than being seen as endorsing discrimination. University of North Carolina President Margaret Spellings even said Wednesday that professors being recruited by her university system don’t want to move there because of the law.

Still, lawmakers in Texas and at least three other states — Kentucky, Virginia and Washington — have introduced similar bills.

San Antonio is the site of the 2018 NCAA men’s basketball Final Four, which Straus said the city hopes will generate $230 million-plus in economic activity — though he stopped short of saying a bathroom bill could derail the event.

Straus is at the height of his powers after being elected unanimously to a record-tying fifth straight term as speaker. In previous sessions, Straus swatted away tea party-backed challengers who branded him as too moderate, but none bothered to oppose him this time.

Straus can ensure that a bathroom bill never makes it to the House floor, but told reporters Wednesday that he doesn’t plan on doing that. Instead, he suggested, he used his speech to ensure lawmakers know what they could be getting themselves into.

“I hear from the business community and leaders back home that are very, very concerned that we might be walking into a situation that would be similar to be what North Carolina has experienced,” Straus said. “I’m hearing that we should be very, very cautious about that, and I agree with that.”

Trump meets with SCOTUS candidate who compared being gay with pedophilia, incest