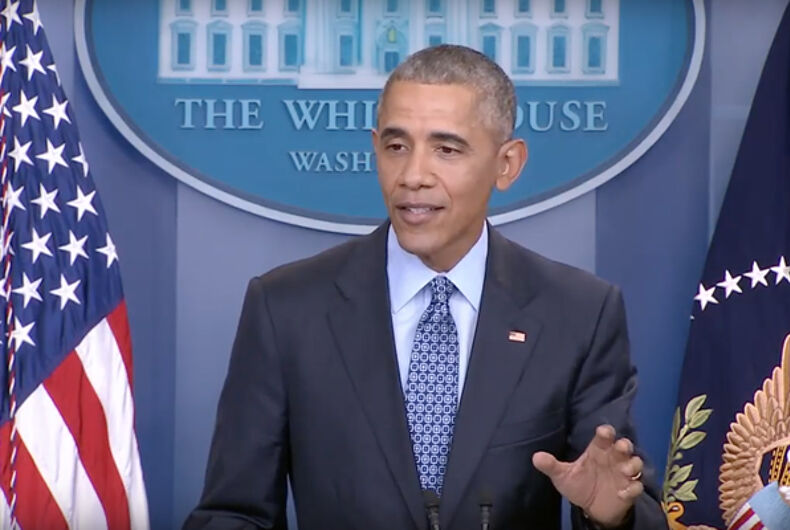 President Barack Obama held his final press conference on Wednesday, in which he looked back on the progress in the LGBTQ rights fight that occurred during his administration, giving most of the credit to individuals activists.

Obama called on a reporter from the Washington Blade, which they note marks the first time a U.S. President has called on a member of the LGBTQ media during a news conference, who asked about achievements in this area during his tenure.

“I could not be prouder of the transformation that’s taken place in our society just in the last decade,” Obama said. “And, I’ve said before, I think we made some useful contributions to it, but the primary heroes in this stage of our growth as a democracy and a society are all the individual activists and sons and daughters and couples who courageously said, this is who I am and I’m proud of it.”

He credited the work of activists as having “opened people’s minds and opened their hearts, and, eventually, laws caught up.”

While Obama initially opposed same-sex marriage, he eventually came around to supporting it, and spoke in favor of the Supreme Court decision which made it the law of the land. His administration stopped defending the Defense of Marriage Act, which denied federal recognition of same-sex couples.

More recently, he has granted a pardon to transgender former soldier Chelsea Manning, who was imprisoned for leaking classified information to WikiLeaks, as well as former Army captain Peter Heidgerd, who was convicted of a felony after being found in a relationship with another man in 1989.

“I don’t think any of that would have happened without the activism, in some cases loud and noisy, but in some cases just quiet and very personal,” Obama said. “And I think that what we did as an administration was to help the society to move in a better direction, but to do so in a way that didn’t create an enormous backlash and was systematic and respectful of the fact, you know, in some cases these issues were controversial.”

He also recalled presenting the Presidential Medal of Freedom to Ellen DeGeneres, whom he credits with helping move society forward on the issue by being open about who she was, even though it was difficult.

“I think somebody that kind and likable, projecting into, you know, living rooms around the country,” Obama said. “You know, that changed attitudes. And that wasn’t easy to do for her. And that’s just one small example of what was happening in countless communities all across the country because American society has changed.”

He said he believes that LGBTQ rights will not be reversed, despite an incoming administration that is much less friendly to the community.

“The attitudes of young people, in particular, have changed,” Obama said. “That doesn’t mean there aren’t going to be some fights that are important, legal issues, issues surrounding transgender persons. There’s still going to be some battles that need to take place.”

Hillary Clinton’s LGBT Outreach Coordinator: Now is not the time to keep quiet