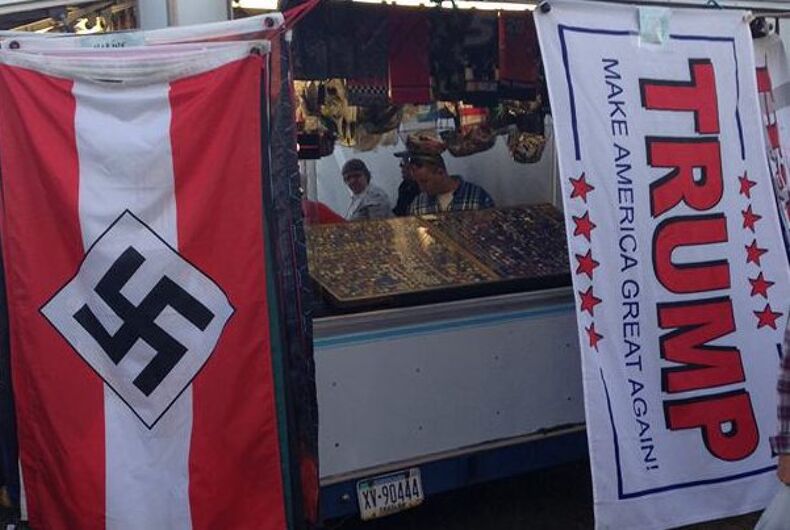 Neo-Nazi Donald Trump supporter Andrew Anglin is targeting Jewish people in Whitefish, Montana, in reaction to a backlash against the mother of yet another white supremacist, Richard Spencer. Spencer, who coined the term “alt-right,” gained prominent media attention after video of a speech celebrating Trump’s win surfaced last month.

“Hail trump! Hail our people! Hail victory!” Spencer yelled, after delivering a speech in which the United States Holocaust Museum noted he made “several direct and indirect references to Jews and other minorities, often alluding to Nazism.”

Several in the crowd gave the Nazi salute in response at the end of his speech.

Anglin has published the names, pictures, contact information, and addresses of alleged Jews in the small town on his website The Daily Stormer. He tells his readers to “take action” against them, adding that they should not engage in “violence or threats of violence.”

“This is the Jews for you, people,” he writes. “They are a vicious, evil race of hate-filled psychopaths. When you do something they don’t like, they will use the power of the media to come down on you, assassinate your character. They will call you names and accuse you of things. They will go after your money. If all that fails, they will attack your mother.”

The list of alleged Jews includes realtor Tanya Gersh, who allegedly called on Sherry Spencer, Richard’s mother, to sell a downtown mixed-use building she owns and donate the proceeds or face protests. The building was formerly owned by her son. It contains vacation rentals on the top floor and business leasing on street-level.

Anglin couldn’t find social media accounts for Gersh, but did find them for her son, whom he calls “a creepy little faggot.”

“You can hit him up, tell them what you think of his whore mother’s vicious attack on the community of Whitefish,” he writes.

The Daily Stormer list also targets leaders of the anti-hate group Love Lives Here, which Sherry Spencer claimed was  “causing financial harm to many innocent parties,” a charge they deny.

“As parents, we deeply love our son, as we always will. We unequivocally do not agree with the extreme positions espoused by Richard,” she told KTMF-TV.

She also published a post to the website Medium titled, “Does Love Really Live Here?” in which she criticizes the group’s efforts against her.

“We are not racists,” she and her husband, Richard’s father, Rand, said in an article they published on Daily Inter Lake. “We have never been racists. We do not endorse the idea of white nationalism.”

Richard Spencer recently told the publication that he might run for Montana’s lone congressional seat.

The Daily Stormer endorsed Trump during the presidential campaign.

This proposal scores an unexpected smile from a stranger, and it’s perfect