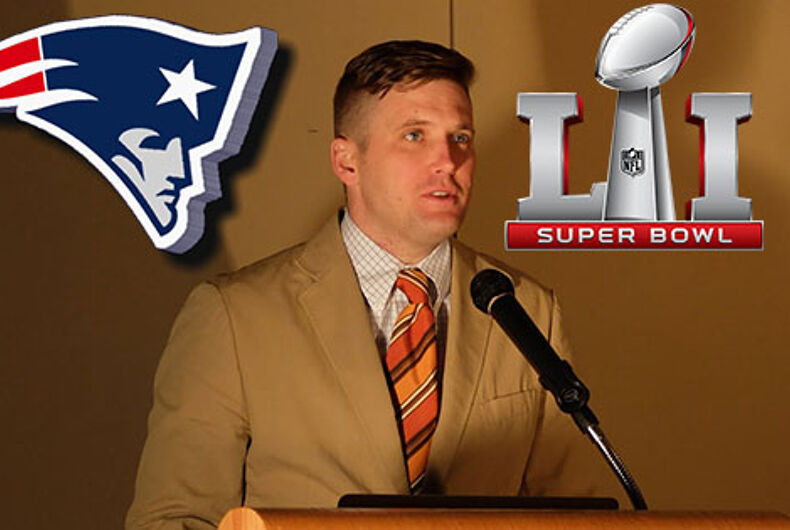 There’s new controversy for the man who earned YouTube fame for getting punched in the face during a TV interview on inauguration day, and previously for a rally at which supporters offered him a Nazi salute.

White nationalist Richard Spencer is the head of the National Policy Institute and according to the Southern Poverty Law Center, “one of the country’s most successful young white nationalist leaders.” According to Twitter, he’s a Boston native who expressed his pride for the Super Bowl champion New England Patriots in a tweet befitting his racist, Aryan outlook:

I was born in Boston, Mass. I'm proud of the NFL's Whitest team!#superbowl

When his online opponents jumped at the bait, followers of Spencer responded in kind with suggestions for a ban of “Black History Month” — which President Trump last week dubbed, “African American History Month.” It should be noted, he is hardly the first president to include mention of “African Americans” in that annual proclamation, as Snopes outlined in a post.

The Patriots even call their Blacks "White." #SuperBowl2017 #Trump#Brady pic.twitter.com/UR4YCs7xcH

When it seemed as if the Falcons could not lose, a writer for NBC’s Tonight Show engaged Spencer with an uncensored tweet full of vim and vigor as well as vulgarity:

.@RichardBSpencer how does it feel to be losing to America's blackest gayest city you nazi piece of fucking garbage

But Spencer dismissed the taunt once the Patriots succeeded in their historic comeback to win Super Bowl LI.

And amid all the ugliness, Spencer celebrated his Aryan hero, quarterback Tom Brady.

Spencer was not above the race baiting, however, tweeting before the game a “birthday wish” to the unarmed black teenager whose 2012 murder by a white man sparked national outrage.

And as Spencer’s tweet resurfaced in headlines around the world, some on Twitter called on opponents of the so-called Alt-right to stop feeding the monster:

Spencer, however, was undeterred.

Editor’s note: this story was updated to include a link to Snopes that showed President Trump did not rename Black History Month “African American Month” but that was one of several presidents to use the terms interchangeably.