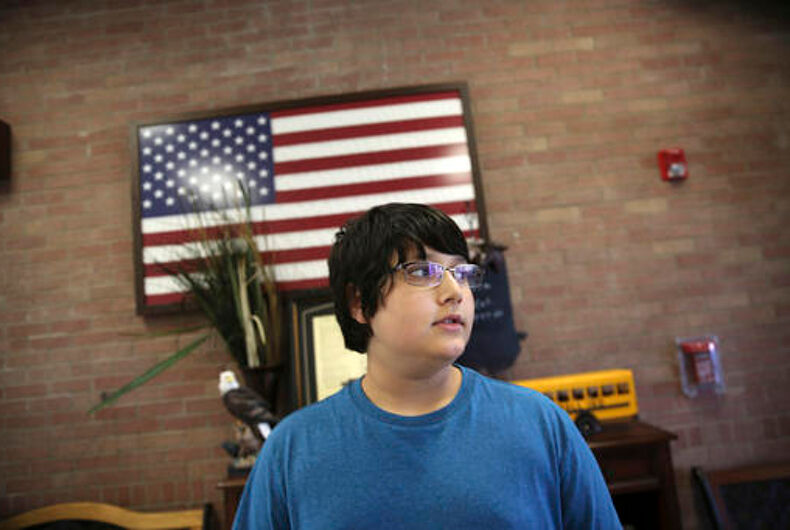 In this Thursday, Nov. 10, 2016 photo, seventh-grader Habib Rahman, 12, looks out the front door of his middle school in Rockwall, Texas. Children are processing the outcome of a presidential run that was often not kid-friendly. And for some, Donald Trump’s campaign rhetoric make them fearful of what his presidency will mean. Photo: AP Photo/LM Otero

DALLAS (AP) — Thirteen-year-old Sophia Davis, who is black and has friends who are Hispanic, Muslims and gay, is worried that Donald Trump’s election will lead to the acceptance of a “culture of violence and hateful speech.”

“It’s just being a minority in this country. That’s hard as it is. And now having a president that is not going to stand up for those minorities, that’s even worse,” the Brooklyn, New York, eighth-grader said.

Children are processing the outcome of a presidential run that was often not kid-friendly. And for some, Trump’s campaign rhetoric made them fearful of a White House controlled by the brash Republican. Others were intrigued with the president-elect and admired his business record.

Evan Canby-Pratt was in tears after waking up Wednesday to find that Democrat Hillary Clinton had lost.

The chance to elect the first woman president had excited the 12-year-old. Trump “really scares” her with his comments about Latinos and other groups and his treatment of women.

“It seems like he just takes what people are afraid of and makes them even more scared of it,” said Evan, a white seventh-grader in Fayetteville, Georgia.

When 12-year-old Habib Rahman’s mother burst into tears while driving him to school the day after the election, he put his hand on her shoulder and recited a passage from the Quran about ease following hardship.

“I’d barely seen my mom cry. And when I do, I feel like I should try and help her as quickly as possible,” said Habib, a seventh-grader from suburban Dallas who would’ve liked to see Democratic Sen. Bernie Sanders go farther in the race.

As the family watched the election results, his mother, Melissa Walker, grew concerned that they could become targets, thinking of comments Trump had made about Muslims, which included proposing a ban on foreign Muslims entering the U.S. She said she doesn’t think Trump would speak out against violence toward Muslims.

“It’s upsetting,” Habib said, “because most people coming to the country are trying to find a safer place.”

The U.S. Census Bureau projects that minorities will make up more than half of the nation’s people under age 18 by 2020, roughly two decades sooner than when that shift takes place for the overall population.

Trump also promised during his campaign to build a wall on the U.S.-Mexico border, accused Mexico of sending rapists and other criminals here and advocated mass deportations. He’s tried to walk back some of the harshest comments.

Osiris Ramirez said he wasn’t happy that Trump won “because of what he said about Mexicans and all that.” The 10-year-old Phoenix boy’s parents are Mexican immigrants who recently became U.S. citizens, and he’s worried that Trump will not treat immigrants fairly.

Ethan Hedden, a seventh-grader in Fayetteville, Georgia, said he favored Trump in the election. The 13-year-old called much of the reaction over Trump’s comments “a little bit overdramatic” but said he could also see where other people were coming from.

The election was the topic of many conversations at school, he said, but he found other students were unwilling to discuss anything negative about Clinton, who faced persistent questions about her honesty and trustworthiness. He thought many classmates were more anti-Trump than pro-Clinton. Among the things he didn’t like about Clinton were her ideas on tightening restrictions on guns.

“Mostly, I just kept quiet and listened to them,” said Ethan, whose mother is Native American and father is of Italian descent.

Nine-year-old Gracyn Marquez was fine with either candidate winning. “I kind of wanted Donald Trump to win because he’s a really good businessman, but I also wanted Hillary to win because she’s a strong woman,” the Dallas-area third-grader said.

Her Hispanic father, Mateo Marquez, who teaches kids mindfulness through yoga, said he asked those in a preschool class on Election Day what they would do if they were president. He said their answers were “simple but very powerful” and included being nice to people and giving homes to the homeless.

Lamisa Mustafa, a 17-year-old Dallas-area high school senior who is Muslim, said she was sad and scared that Americans had elected Trump. She said his talk of a ban on Muslims goes against American values and religious freedom.

But as the week went on, she took heart from Clinton’s concession speech and is looking forward. She worries that protests over Trump might hurt the goal of unity.

“We need to keep fighting for what we believe in — make sure that none of our rights are threatened,” she said. “But we can do that with peaceful conversations with people.”

© 2016, Associated Press, All Rights Reserved.
This material may not be published, broadcast, rewritten, or redistributed.
News (USA)
Election 2020