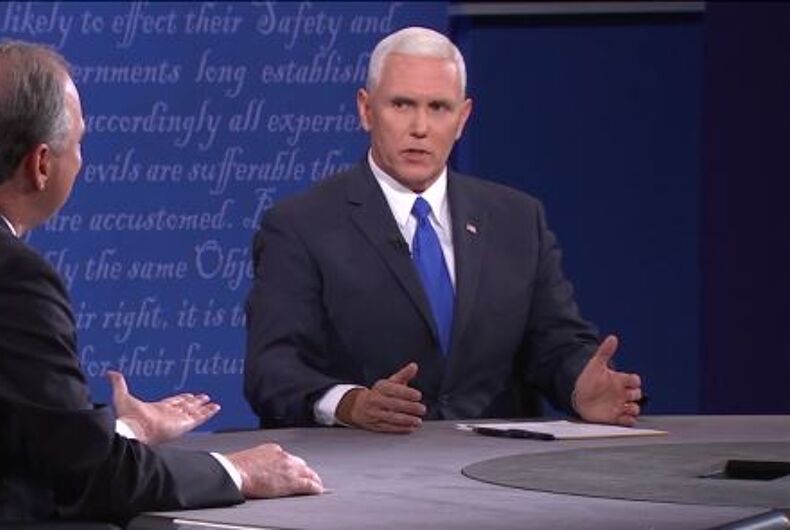 Last night’s vice presidential debate left a lot to be desired, and a lot to be understood as Tim Kaine and Mike Pence spent so much time talking over each other that at times it was impossible to make out what either one was saying.

Two lines that did come out crystal clear, however, were Pence’s double entendre show-stealers.

First Pence made a show of his faith by saying, “I try to spend a little time on my knees every day.” Twitter wasted no time in coming for that.

Best line of #VPDebate Pence: "I spend a little time on my knees every day." There must have been a less gay porn-y way of phrasing that.

Pence: I try to get down on my knees at least once a day. Well we know how he's helping #Trump 🍆😮 #VPDebate #debatenight #MikePence

FInally, common ground with Mike Pence! I also try to spend a little bit of time on my knees every day 😜😜😜😜😜 (i fall down a lot) #VPDebate

Then there was Pence’s objection to Kaine bringing up Donald Trump’s infamous remark about Mexicans coming to America being primarily rapists and criminals.

“You whipped out that Mexican thing again,” Pence shot back, before saying there were “criminal aliens” who have “come into this country illegally who are perpetrating violence,” and chided Kaine for leaving out Trump’s “And some, I assume, are good people” closer.

But by then the internet had already stopped listening and had taken to Twitter to poke even more fun at the candidate.

But it was on Facebook that we found the best summary of the night, including the aforementioned lines.

Out and proud: Why it is important to learn your LGBT history