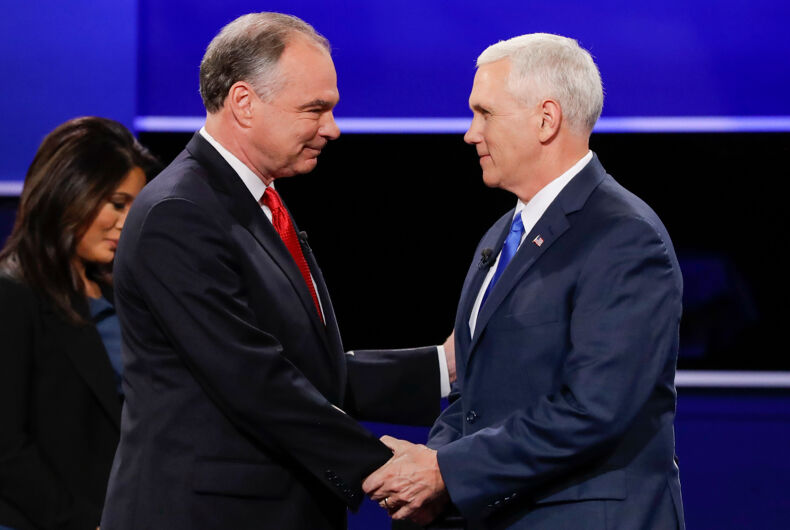 Except for a question about avoiding a repeat of the June massacre at Pulse nightclub in Orlando, Fla., and a reference to Russian oppression of LGBTQ people, the one and only vice presidential debate followed a pattern set at the first presidential debate in avoiding the rights of lesbians, gays, bisexuals, transgender and queer Americans.

One can only hope CNN’s Anderson Cooper will nip that in the bud at the presidential debate he will co-moderate with ABC’s Martha Raddatz on Sunday.

U.S. Sen. Tim Kaine of Virginia was the chief interrupter at the debate Tuesday night at Longwood University in his home state. He was like a raging bull in his determination to smash Donald Trump’s qualifications for the presidency, casting him as a “me-first” mogul who won’t level with Americans about his business record. Mike Pence, the antigay governor of Indiana, hit back with criticism of Hillary Clinton but didn’t dispute that running mate Trump hadn’t paid federal taxes for years, and wouldn’t refute Trump’s praise of Russia.

No one, neither the moderator nor Kaine, raised the subject of Pence’s oppressive anti-LGBTQ laws in Indiana and his positions when he served in Congress.

The two men, who have received little attention in a race focused on the top two candidates, faced off for 90 minutes in the only vice presidential debate of the campaign. Analysts credited Pence with being calm, poised, articulate and unrattled in the face of a barrage of attacks by Kaine, who was critiqued for being overly aggressive.

The debate was live Tweeted by LGBTQ Nation, but we weren’t the only ones: the GOP nominee live-tweeted his own view:

"@Jnelson52722: @realDonaldTrump @Susiesentinel Kaine looks like an evil crook out of the Batman movies"

Mike Pence won big. We should all be proud of Mike!

The lone reference to LGBTQ people came during a discussion of Russia. Kaine said Clinton would stand up to Russia in a way that Trump would not, noting the GOP nominee has repeatedly praised Russian President Vladimir Putin. Kaine then attacked Pence directly for what he called “the odd claim” that Putin was a better leader than Obama.

“Vladimir Putin’s run his economy into the ground, he persecutes LGBT folks and journalists. If you don’t know the difference between dictatorship and leadership, then you have got to go back to a fifth-grade civics class,” Kaine said.

“That is absolutely inaccurate,” Pence later claimed of his previous comments comparing Obama and Putin. But as Kaine said, you can go to the tape. Speaking on CNN from the Ronald Reagan Presidential Library last month, Pence backed up his running mate’s claim, although he used the word “stronger” rather than “better.”

“I think it’s inarguable that Vladimir Putin has been a stronger leader in his country than Barack Obama has been in this country,” Pence said then.

Pence was given multiple opportunities to refute Trump’s support of Putin and Russia and passed each time, avoiding a specific defense but continuing to express his support.

Austria will upgrade civil unions for gay couples, but won’t call it ‘marriage’