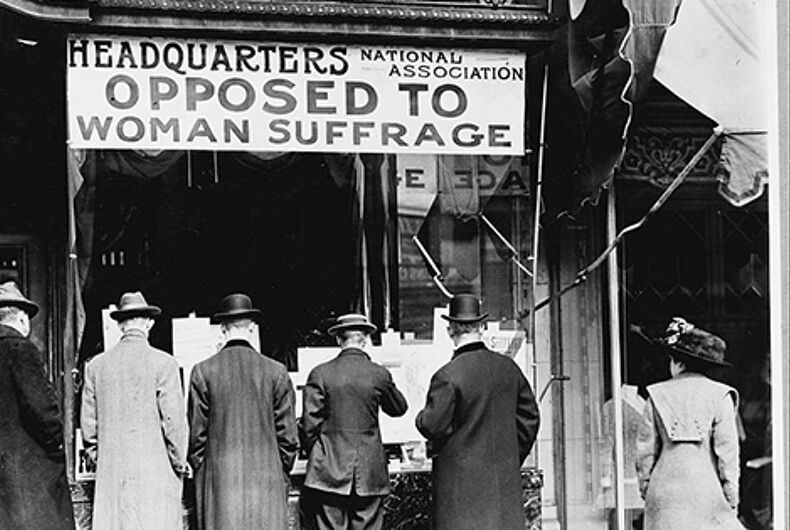 Picture of the entrance of the National Association Opposed To Woman Suffrage's headquarters.Photo: Library of Congress

Donald Trump is so unappealing to female voters that the only way he could become president now is if none of them were allowed to vote, which is precisely what some Trump supporters would like to see happen.

Before long the new hashtag #repealthe19th was born and trending among the deplorable wing of the Donald Trump supporters, which at this point is moving further from half and closer to all.

Trump detractors soon adopted the hashtag to speak out against it.

I just saw a woman tweet that we should #RepealThe19th.

Her bio says "Defender of the US Constitution." Oh, the irony.

We plan on shattering the glass ceiling on November 8, 2016
Not only for ourselves
But for our daughters 👊🏻❤️💙#repealthe19th #ExpectUs pic.twitter.com/tqEIbdhkTD

Me headed to the polls after seeing that #repealthe19th is *literally* trending… pic.twitter.com/XZhupTpAiU

The Trump campaign is in free fall. At time of writing, FiveThirtyEight gives Clinton an 86.8% chance of winning the election.

The 2005 “Access Hollywood” tape that shows him bragging about committing sexual assault was followed by the release of audio from interviews Trump did with Howard Stern over the years that include more lewd language. That includes Trump telling Stern he can call his daughter Ivanka a “piece of ass,” as well as the candidate making a point to tell him that he has never had gay thoughts during sex.

The Stern tapes also feature him admitting to barging in on beauty pageant contestants to see them in various states of undress, including, it seems, some who were underage.

He has also now been accused by several women of sexually assaulting them, suggesting what was heard on the “Access Hollywood” tape was indeed an admission of guilt and not, as he wants to claim, harmless “locker room talk.”

Another video has surfaced from 1992 where Trump says about a 10-year-old girl that he would be dating her in ten years.

Trump is facing a lawsuit alleging he raped a 13-year-old girl. It has a hearing date set for December.