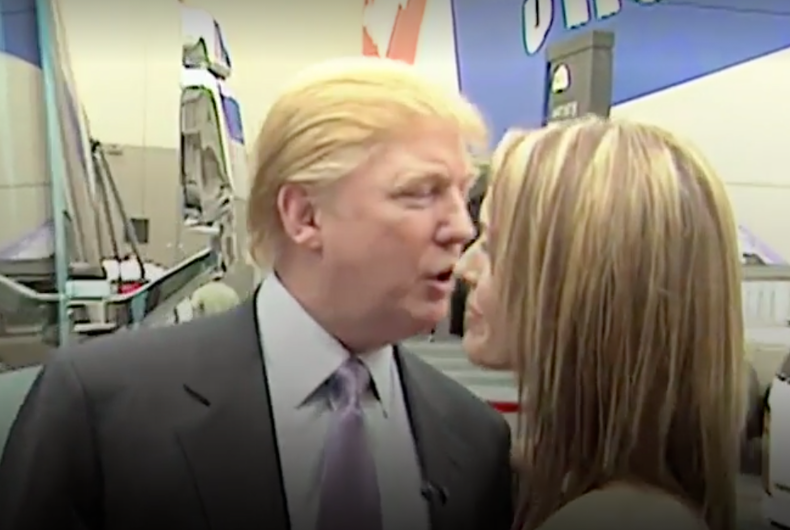 Donald Trump has offended many groups of people during his campaign as the Republican party continues to stand beside him. And while the recent release of video from 2005 in which he boasts about sexually assaulting women has caused significant blowback from Republicans, some familiar conservative talking heads are jumping to his defense.

Family Research Council head Tony Perkins also tried to spin the conversation away from Trump’s “values” and toward his expressed support for specific conservative causes.

“My personal support for Donald Trump has never been based upon shared values, it is based upon shared concerns about issues such as: justices on the Supreme Court that ignore the constitution, America’s continued vulnerability to Islamic terrorists and the systematic attack on religious liberty that we’ve seen in the last 7 1/2 years,” Perkins told BuzzFeed.

The Washington Post published a video on Friday in which Trump can be heard talking on a hot mic with Access Hollywood host Billy Bush using vulgar language and bragging about how easy it is to sexually assault women when you’re a celebrity.

In a videotaped apology, Trump said: “I said it, I was wrong, and I apologize.”

“I’ve never said I’m a perfect person, nor pretended to be someone that I’m not. I’ve said and done things I regret, and the words released today on this more-than-a-decade-old video are one of them,” Trump began. “Anyone who knows me knows these words don’t reflect who I am.”

But a survey of women’s accusations against Trump casts doubt on that statement. When the New York Times interviewed dozens women who’d worked for Trump, many recalled being sexually harassed by the real estate mogul.

“He kissed me directly on the lips. I thought, ‘Oh my God, gross,’” said Temple Taggart, a former Miss Utah. “He was married to Marla Maples at the time. I think there were a few other girls that he kissed on the mouth. I was like, ‘Wow, that’s inappropriate.’”

CNN anchor Erin Burnett shared a similar story related by a friend following the release of the video.

“That’s exactly what Trump did to me,” Burnett quoted her friend as saying. “Trump took Tic Tacs, suggested that I take them also. He then leaned in … catching me off guard and kissed me almost on the lips. I was really freaked out.”

“I better use some Tic Tacs in case I start kissing her,” Trump says, implying his actions are beyond his control. “You know I’m automatically attracted to beautiful—I just start kissing them, it’s like a magnet. Just kiss. I don’t even wait.”

But non-consensual kissing pales in comparison to some of what Trump has been accused of. In 1997, he was sued for sexual harassment against a former business partner, Jill Harth, who said Trump pushed her against a wall and started groping and attempting to kiss her before she vomited as a defense mechanism.

Also in the 1990s, Trump’s ex-wife Ivana described being raped by him during a deposition, though she later clarified that while she felt “violated” she didn’t mean “rape” in the “literal or criminal sense.”

And then there’s the most recent lawsuit, in which Trump is accused of raping a 13-year-old girl. According the the lawsuit, Trump allegedly told the girl he’d do “whatever he wanted” while she was tied to a bed, and hit her in the face when she screamed for him to stop.

Trump denies all these allegations. And the child rape case isn’t scheduled for a conference hearing until December 16. But the similarities between his recorded statements and his alleged actions are striking.