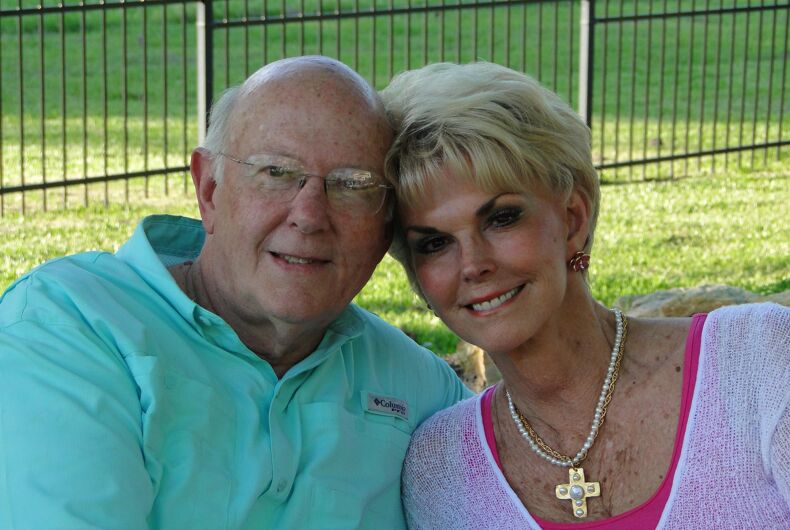 Bob and Genie Flournoy of East Texas are the toast of right wing religious zealots across America for advertising in their local Christian magazine their refusal to book weddings for same-sex or transgender couples.

“Our Christian faith demands that we not participate in same-sex, transgender or any other perversion of marriage,” the ad says. “If you disagree with our stance on marriage, please respect our Christian belief and have your wedding elsewhere.”

Mr. Flournoy is the owner of Texas Forest Country Weddings, a bed and breakfast venue in Manning, Texas, that features a mansion, a lodge, acres upon acres of beautiful land, and the online equivalent of a big “You’re Not Welcome” sign to LGBTQ couples.

Flournoy posted on his website that the property handed down from his father “gives us a ministry to provide rest, relaxation and renewal to weary folks and a great place for a man and a woman to begin a wonderful life together.

“I love Manning and you will too. I am anxious to share it with all who will come and experience this place that I call home.”

“All who will come,” however, does not include gays or trans people who want to wed there. Flournoy cited the Supreme Court’s 2015 decision on marriage in a recent post about his decision.

“The recent and ungodly Obergefeld decision out of the Supreme Court permits other than one man and one woman to marry. This, in my opinion, is the single most destructive decision of good order in America that has ever been rendered. It adversely affects all of society and elevates man as supreme ruler of the universe. It is contrary to the explicit admonitions of God and as a result we can no longer expect the blessings of God upon this Nation.”

“We don’t turn away gays at the property, we just don’t host same-sex marriage ceremonies,” said a spokesperson for the venue in response to questions from LGBTQ Nation. When pressed to clarify why transgender Americans who are straight and engaged to marry heterosexuals would be excluded from booking a wedding at Texas Forest, the unnamed spokesperson responded, “We book traditional heterosexual weddings. Pretty simple.”

Gay congressional candidate’s sisters say he is ‘unfit to serve’