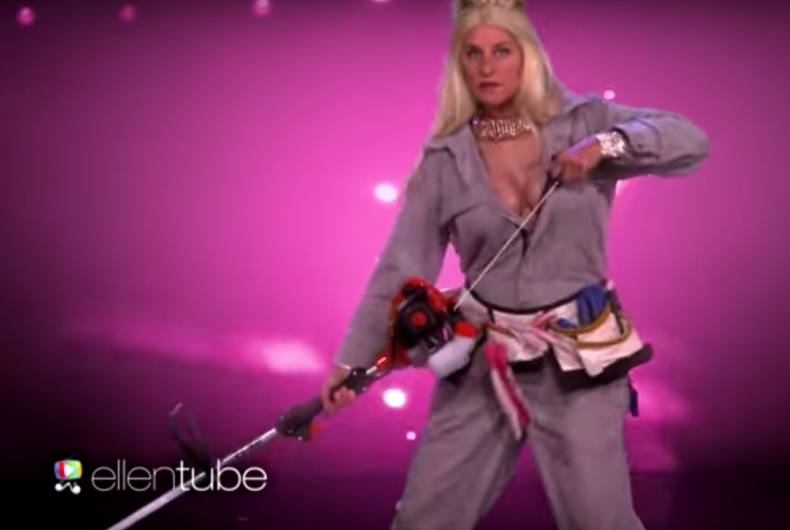 It’s no secret that Ellen DeGeneres loves to dance. But this may be the first time we’ve seen her shake it for some paper. To Genuwine’s “Pony,” no less.

“tWitch and Channing starred together in Magic Mike, and Magic Mike was a huge, huge hit. I mean, so big that they are actually doing an all-female reboot, because they are doing that with everything. They did Ghostbusters and Ocean’s Eleven,” Ellen says in an intro to the video clip. “Thanks to Channing, I get to show you the exclusive sneak-peek.”

The clip gives each character a moment to shine, ending with an impressive splits from Oprah. As the voice-over notes: “This fall, Hillary’s not the only one bringing women to the polls.”

But as Ellen soon learned, dancing on a poll or in a club is worlds away from her pre-show boogie, or even her hip-hop number with tWitch.

“We spent a lot of time shooting that, and then my knees spent a lot of time recovering. For some reason I thought it would be a good idea to have Jenna teach some dance moves, and she kept telling me to ‘drop it down low,'” Ellen told viewers. “So now my ‘down low’ hurts really, really bad. My knees are black and blue.”

The experience apparently made her look at the profession behind the parody differently.

“I have a new respect for strippers. Give them more than singles, you guys!”

Channing Tatum and Oprah Winfrey are scheduled to appear on Tuesday’s show, along with Olympian Simone Biles.

Watch Ellen and her crew make it rain below.

Why ‘Is it a boy or a girl?’ shouldn’t be the first question we ask