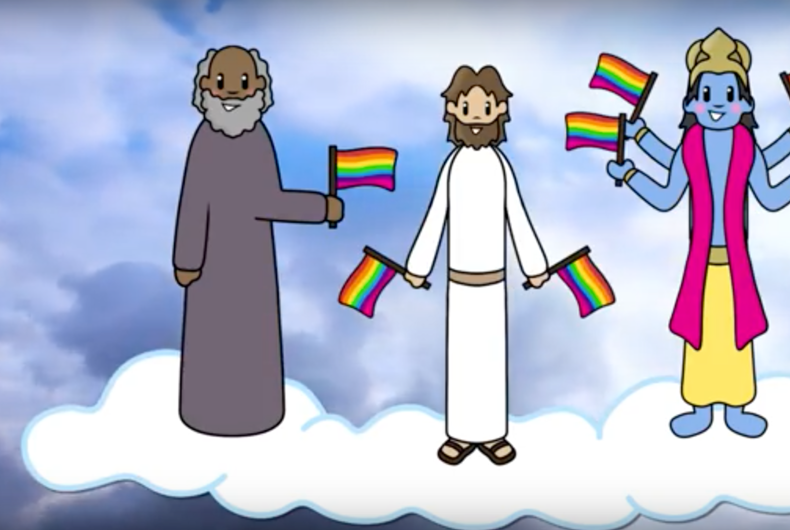 While faith communities are slowly becoming more welcoming of LGBTQ people — in general and within their congregations — many religious groups are still preaching hate, appealing to children through cartoons.

It was one such cartoon — a video put out by the Jehovah’s Witnesses telling a young girl how to preach to a classmate with two moms — that inspired a gay YouTube to create his own cartoon about God and gays with a message of love and acceptance.

Olly Pike, who makes LGBTQ educational videos for young audiences at popnolly.com, created “God Loves LGBT+” to reinforce the message that God loves all people, and all families.

“Do you believe in God? If you do, that’s cool. If you don’t, that’s cool too,” the voice-over begins. “We just wanted to let you know that if you do believe in Jesus, Jehovah, Vishnu, or anyone else, well that he, or she, loves gay people just as much as straight people.”

“It is so dangerous to suggest to any child that there is anything wrong with being LGBT+. Not only can material like this plant seeds of homophobia and discrimination, but it can also cause future LGBT+ youths and young adults to have serious mental and physical issues,” Pike said in a statement.

He told Gay Star News that he was raised in a Christian household, a mostly positive experience until he realized he was gay.

‘I’d say now, although I wouldn’t claim to be a Christian, my spiritual side is something I would definitely like to explore further, now that I am so much happier in myself,” Pike told GSN. “Ideally I should be allowed to explore any religion I like.”

Check out “God Loves LGBT+” below. Pop’n’Olly is currently fundraising to support its continued educational work.