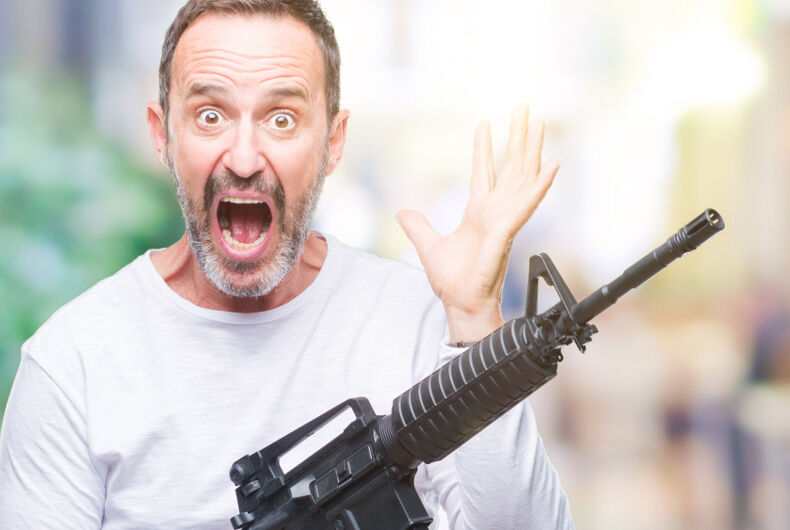 Last week, The New Yorker published a blistering exposé of corruption at the National Rifle Association (NRA) accusing the gun manufacturer lobby of widespread corruption and financial mismanagement to the tune of $40 million. This week the group faces even more scandal as its CEO Wayne LaPierre has accused its President Oliver North of extortion and a group has filed a lawsuit accusing the NRA of illegally donating “up to 9,259 times the limit” to Trump’s presidential campaign.

Mr. North asked Mr. LaPierre to resign on Wednesday, according to documents reviewed by The New York Times. He said he had also created a committee to review allegations of financial improprieties that threaten the N.R.A.’s status as a nonprofit organization.

But Mr. LaPierre, in a stinging letter sent on Thursday night to the N.R.A.’s board, accused Mr. North of threatening to leak damaging information about him and other N.R.A. executives unless he stepped down.

“Yesterday evening, I was forced to confront one of those defining choices — styled, in the parlance of extortionists — as an offer I couldn’t refuse,” Mr. LaPierre wrote. “I refused it.”

North actually announced this morning that he will step down as president at the end of his current term.

In addition to this infighting, Giffords, a firearms reform group, recently filed a lawsuit against the Federal Exchange Commission (FEC) “for failing to uphold financial laws allegedly broken by the NRA.” The lawsuit claims:

… the National Rifle Association (“NRA”) violated the Federal Election Campaign Act by using a complex network of shell corporations to unlawfully coordinate expenditures with the campaigns of at least seven candidates for federal office, thereby making millions of dollars of illegal, unreported and excessive in-kind contributions, including up to $25 million in illegal contributions to now President Donald J. Trump.”

The illegal contributions to the Trump campaign alone are up to 9,259 times the limit set by Congress. Yet the [FEC] has taken no action on Plaintiff’s complaints.

Taken together, these facts demonstrate an elaborate scheme for the NRA to unlawfully coordinate with the candidates it supports for federal office, including Donald J. Trump, Thom Tillis, Cory Gardner, Tom Cotton, Ron Johnson, Matt Rosendale, and Josh Hawley, while evading detection of its violations of federal law concerning the coordination of advertising communications through common vendors.”

Right now, the organization is hosting the 148th NRA Annual Meetings & Exhibits at which President Trump promised to exit a international arms treaty and someone threw a phone at him.

The NRA has a history of anti-LGBTQ rhetoric and supporters. After the 2016 Pulse nightclub shooting, the NRA released an op-ed blaming “political correctness” for the attack. The NRA has said survivors of mass shootings who want to expand firearm regulations “want to make all of us less free!”