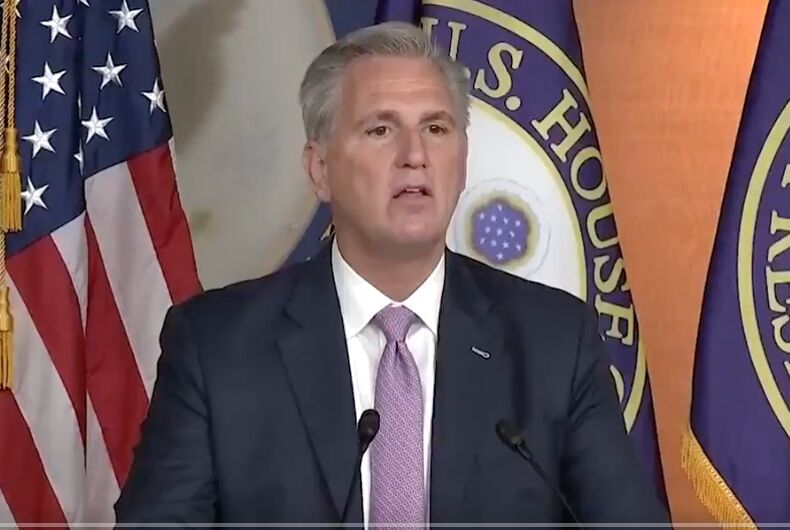 In a spectacle that was at once comical and horrifying, Rep. Kevin McCarthy (R-CA) managed to sufficiently debase himself to win election as Speaker of the House after a mere 15 ballots late last Friday night. McCarthy’s victory, such as it was, came after he cut yet another deal with a group of holdouts and believed he had the votes, only to be publicly humiliated by Rep. Matt Gaetz (R-FL). There was shouting and nearly a physical altercation, and then finally, Gaetz, who had vowed never to vote for McCarthy, voted present, and McCarthy was elected Speaker.

So many things went wrong during the three days leading up to the final vote that it’s impossible to list them all. But one thing is obvious: the hell of last week is just the prologue of what the next two years will be like.

For one thing, McCarthy is an incredibly weak and feckless politician. Even by a politician’s standards, he’s renowned for not being a man of his word. Unlike his predecessor, Rep. Nancy Pelosi (D-CA), he’s not a political genius. Many reporters think he’s just plain dumb (but they won’t say so). Many politicians, including in his party, simply hate him.

On top of all these failings, to secure their votes to become Speaker, McCarthy gave the people who hate him all the artillery they need to take him down in short order. Now just one person can challenge his leadership, effectively calling his Speakership into question. That’s a time bomb that’s already ticking.

McCarthy also promised to give the holdouts a controlling number of seats on the Rules Committee, which is the group that decides what bills come to the floor for a vote. In doing so, he ceded control of the legislative agenda to his party’s worst bomb throwers.

They embody all the very worst impulses of the GOP. Media liked to label the holdouts as “far right” but that’s not correct.

Reporters pointed out that all but two of the 20 original holdouts were election deniers. But 139 Republicans voted against certifying the 2020 presidential election results, and most of those returning this year supported McCarthy. And when you have Rep. Marjorie Taylor Greene (R-GA) and Rep. Jim Jordan (R-OH) in your corner, as McCarthy did, it’s hard to label anyone else as far right.

What we saw instead is the party’s impulse to simply blow things up for the sake of blowing things up, regardless of the consequences. This tweet from a Politico reporter sums it up:

One House Republican: “I love shit shows and this is a shit show to behold.”

There are no policy differences at stake here. The only distinction is that a small group of members of Congress simply don’t recognize that they are a minority. For them, elections have no consequences. Their goals are to impose their radical agenda on the nation, even if Democrats control the Senate and the White House. They simply don’t care about democratic processes, like checks and balances.

That authoritarian impulse is the natural result of the Trump hold on the presidency. Ironically, Trump was the one who managed to salvage McCarthy’s election by calling the recalcitrant members and urging them to back McCarthy. But it’s also telling that in at least one case, a holdout refused to take Trump’s call.

What the holdouts want to do is destroy everything to drain the swamp. They honestly believe there is little difference between the Republican establishment and the Democratic party; they brand them the “uniparty.” That’s why negotiating with the holdouts was so hard for McCarthy. They didn’t have any specific requests beyond tearing it all down.

They’ll soon have their chance. With such a slim majority, it will be hard to get anything done in the House except for endless hearings. The investigations will be dangerous, even if they are just for show. If Republicans decide to hold hearings on transgender athletes, for example, that would pose a direct threat to the athletes and give a bunch of right-wing cranks a platform for their transphobic attacks.

There’s also a good chance that the House Republicans will tank the entire global economy. Congress will need to raise the U.S. debt ceiling sometime this summer, a nominally pro forma effort that the GOP has used in the past to try to blackmail Democrats into budget cuts. Without the debt ceiling being raised, the nation faces the specter of a government shutdown (again), but also, if it goes on long enough, a default on its debt which would rattle the entire world economy.

Thanks to McCarthy’s concessions, it will be even harder to get a vote on the debt ceiling, let alone pass it. Meantime, the anarchists in the GOP don’t care if the government shuts down. They would love it if it did because they would like large parts of government to go away permanently. It’s a game of chicken, where the other side doesn’t care if they drive over the cliff because they think the water looks just fine.

For the longest time, the Republican establishment was happy to entertain the radicals in its midst because it saw them as useful idiots and reliable votes. Now they no longer control the radicals. The extremists control the party. And the party itself is totally out of control.