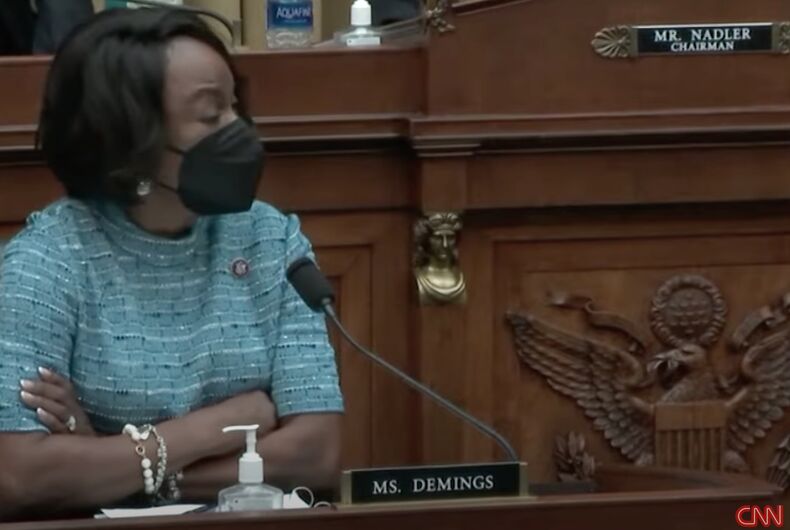 Reps. Val Demings (D-FL) and Jim Jordan (R-OH) lit into each other during a committee hearing on the COVID-19 Hate Crime Act that would address a surge in racist attacks on Asian Americans, leaving committee chair Jerry Nadler (D-NY) fuming and banging his gavel to try to restore order.

During an emotional and impassioned speech, Demings, a Black former police officer, accused Republicans of only supporting police officers when it is politically expedient , and Jordan, who is white, interrupted to object.

Republicans proposed an amendment to the bill that would prevent efforts to defund police departments, an idea supported by racial justice protesters. The bill doesn’t mention defunding police departments and Demings accused her GOP colleagues of trying to score political points on the backs of officers they’ve publicly disrespected.

“I served as a law enforcement officer for 27 years,” Demmings said before Jordan interrupted. “It is a tough job, and good police officers deserve your support.”

“You know, it’s interesting to see my colleagues on the other side of the aisle support the police when it is politically convenient to do so. Law enforcement officers risk their lives every day. They deserve better.”

Jordan has a history of shouting out objections instead of following the correct procedure for legislators to object. Nadler chastised Jordan, telling him he can’t “simply shout out.”

“Mr. Jordan you don’t know what the heck you’re talking about,” Demings said as Nadler tried to restore order.

“I know about my motive,” Jordan replied.

“Did I strike a nerve?” Demings shot back.

After order was restored, Demings launched into a broadside on the GOP’s abandonment of Capitol Police officers who had defended them during the MAGA riots spurred on by former President Donald Trump (R) and supported by many Republican members of Congress.

“My colleagues on the other side of the aisle were silent,” Demings said in her blistering attack on the GOP’s seditionist legislators. “As one person after another person took the microphone and said, ’Go down there and engage in combat,’ ‘fight like hell.’ They used the bicycle racks as deadly missiles against the law enforcement officers that you all say you care about so much.”

In reply, Jordan accused Demings and Democrats of supporting Black Lives Matter protestors who took to the streets worldwide after the murder of Minneapolis resident George Floyd by police. Floyd was pinned to the ground by multiple officers and died as officer Derek Chauvin knelt on his neck while bystanders pleaded with him to stop.

Chauvin was convicted yesterday on two counts of murder and one count of manslaughter. The jury was deliberating as Demings and Jordan sparred in Congress.