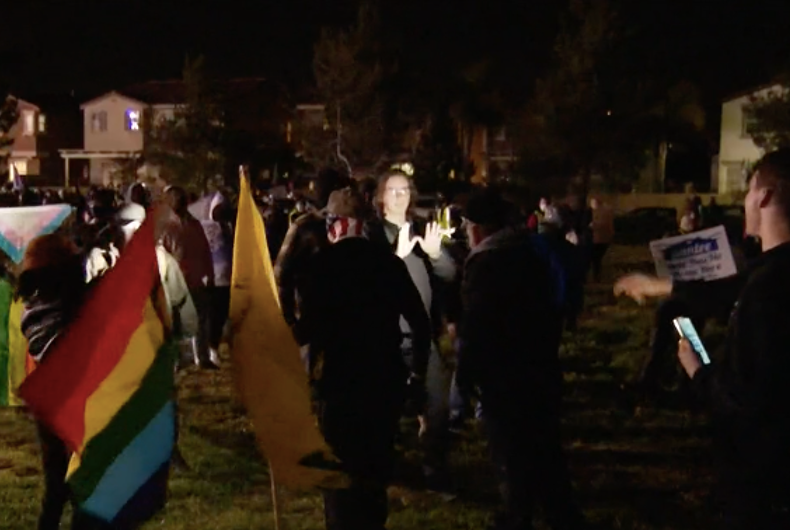 A scene from the protestPhoto: KFMB-TV screenshot

Two dozen sheriff’s deputies armed with shields, helmets, and long batons dispersed dueling protests on Wednesday outside of a San Diego area YMCA. There, protestors clashed over the gym’s policy of allowing transgender women to use the women’s locker room and showers.

On January 11, 17-year-old Rebecca Philips testified at a city council meeting that she had seen a “naked male” while she and the person were both showering in the locker room. Philips ran into a bathroom stall to quickly put on her clothes and then spoke to employees at the gym’s front desk.

They explained that trans women were allowed to use the facilities and that all people are allowed as long as they aren’t on California’s sex offender registry. California law also requires “all business establishments” to offer “full and equal accommodations” to everyone regardless of their sex or gender identity, The San Diego Union-Tribune reported.

“I was made to feel as though I had done something wrong when I talked to people at the YMCA,” Philips told the council. “Somehow the indecent exposure of a male to a female minor was an inconvenience to them.”

“Could you knowingly send an underage girl into a room where there was a naked male and say that she was not in danger, that she was safe?” Philips asked the council, furthering the untrue and transphobic trope that trans people pose a threat to women and children, even though the individual she saw was merely showering. “The fact that we are now tailoring our privacy policies and bathroom laws around transgenders, ignoring the blatant threat to safety that this poses is obscene. The safety of children [and] girls is on the chopping block.”

Philips said her father contacted the local sheriff’s office, and officers there told him never to let her shower at the gym ever again. She also claimed Democrats and Republicans “have all been equally disgusted” by her story.

Philips then appeared on the Tuesday Night show of anti-LGBTQ+ Fox News host Tucker Carlson to share her story. Carlson thanked her for her “bravery.”

so the trans woman she’s referring to didn’t even… do anything? she was just minding her business and changing her clothes?pic.twitter.com/Z8msCC1S86

As Philips’ story spread among right-wing outlets and social media groups, Santee Parents 4 Choice (led by failed Santee school board candidate Tracie Thill) arranged a protest outside of the gym, attended by an estimated 300 people, the Union-Tribune reported. The protest included speeches by a pastor with Foothills Christian Church and El Cajon City Councilmember Phil Ortiz. Attendees cheered as speakers suggested suing the YMCA and pressuring politicians to change the policy.

The protest was also advertised by anti-LGBTQ+ social media figure Mike Forzano who called on others to prevent “far-left disgusting pedophile f**kheads” from disrupting the protest.

“Remember, 70 percent of Antifa [anti-fascist activists] in San Diego comes from the LGBT community,” he said, criticizing the “sick, woke [corporate] policies that cater to this ideology.”

Forzano believes in QAnon, the conspiracy theorist group that believes Democrats, Hollywood elites, and lizard people are torturing and raping kids in an international cabal in order to extract adrenochrome from children’s brains. QAnon members aren’t aligned with any organizations that actually work to prevent child sex trafficking and abuse.

A Facebook group called Party for Socialism and Liberation – San Diego promoted a counterprotest consisting of “a peaceful rally and pro-LGBTQ dance party in support of trans rights.”

“While the right-wing may have a large and loud presence in East County, they do not represent all of its residents,” the group wrote in a public Facebook post. “There are many of us in East County who respect and support the rights and dignity of everyone in our LGBTQ community.”

About 50 counterprotesters attended, waving rainbow flags and dancing at the opposite end of the YMCA parking lot where the protest occurred. While a few scuffles broke out in a small group between the two protests — with some shoving and screaming of profanities — no assaults were reported.

Police later showed up to disperse the groups. The gym closed five hours early to avoid disruption from the demonstrators.

In a statement, the YMCA of San Diego County’s CEO Todd Tibbits said, “Our priority is that everyone is welcome and safe at our Y and we will work to ensure our privacy measures reflect that. We understand that the minor involved felt hurt and frustrated, and we wholeheartedly apologize for not providing her with the level of support she deserves.”

These celebrities came out publicly after 40. It made a world of difference