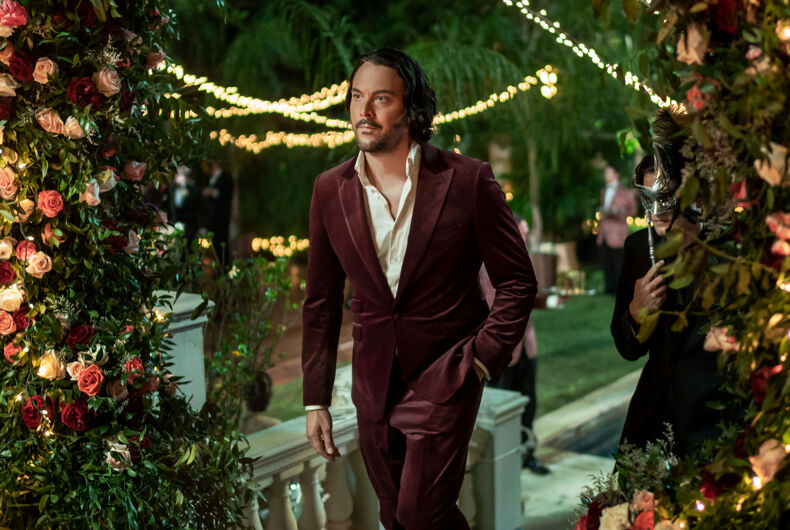 AMC’s adaptation of Interview With the Vampire was something of a surprise hit this past fall, not least because the show swapped the homoerotic subtext of Anne Rice’s 1979 novel for explicitly gay text, while also injecting the overwrought story with some much needed humor. Where Brad Pitt and Tom Cruise tiptoed around their characters’ sexuality in Neil Jordan’s 1994 film version, the series depicted Jacob Anderson and Sam Reid’s Louis and Lestat as full-on bloodsucking lovers, tortured though their relationship may have been. And despite deviating wildly from Rice’s gothic original, fans ate up every queer moment with delight.

Now, AMC is expanding its “Anne Rice’s Immortal Universe” franchise with Mayfair Witches, premiering on Sunday. The show adapts another series of Rice novels about a family of witches haunted by an entity known as Lasher (Jack Huston).

Understandably, fans of Interview With the Vampire may be wondering: How queer is Mayfair Witches going to be?

Let’s start with the books on which the series is based: The Witching Hour (1990), Lasher (1993), and Taltos (1994). Where Interview With the Vampire and many, if not most, of the other books in Rice’s Vampire Chronicles series featured intense relationships between male vampires, the novels that comprise The Lives of the Mayfair Witches center heterosexual eroticism. Procreation and birth are a consistent theme throughout the story of Dr. Rowan Mayfair (played in the AMC show by White Lotus alum Alexandra Daddario), who is torn between her human lover Michael Curry and the malevolent Lasher.

Of course, Rice was one of our great polymorphously perverse popular novelists, and the saga of the Mayfair Witches isn’t without its queer elements. Large sections of the first book are devoted to the family’s history dating back to the late 1600s, which includes a couple queer characters. In the late 19th century, Katherine Mayfair is described as frequently dressing as a man to go out carousing around New Orleans with her brother Julien.

As for Lasher himself, without giving much away, his ultimate motivation is decidedly heterosexual in nature. At the same time, as a disembodied, supernatural being, like many of Rice’s characters he’s not exactly bound by mortal notions of gender and sexuality. It’s entirely possible that the AMC series will tease some of that out further.

Neither Julien nor Katherine are likely to appear in the first season of Mayfair Witches, and no casting announcements have been made so far. But Julien in particular is such an important figure in the series – pulling strings even from beyond the grave in the books – that it’s almost unthinkable that he won’t appear in future seasons, should AMC renew the show.

Like the novels, Mayfair Witches is exponentially less queer than Interview With the Vampire. But the show’s creators have promised LGBTQ+ inclusion in the series.

“It was a complete and total priority for us, and we want, you know, our audience to look at this show and look at all of the characters in the show and feel that they see themselves, whoever they are; that the show is inviting and inclusive of every point of view and… everybody who watches it,” showrunner Esta Spaulding said during a panel discussion at the Television Critics Association press tour last summer.

To that end, they’ve cast out trans actress Jen Richards in a role created for the show. She plays Josephine Mayfair, though it remains unclear in the five episodes provided to critics whether the character herself is trans.

Meanwhile, Harry Hamlin’s character Cortland, Josephine’s father and Julien’s son, seems to have been imbued with some of his father’s hedonistic and dandyish qualities. In the first episode, he’s introduced while getting a foot rub from a handsome hanger-on. And there’s a certain meta quality to casting Hamlin, who played a gay novelist in the 1982 cult classic Making Love.

There are other hints toward Cortland’s possible fluid sexuality, but they’re probably too spoiler-y to include here. Suffice it to say that while it remains to be seen just how queer the character really is, there’s reason to hope!

Did George Santos flash a white nationalist sign on the floor of Congress?