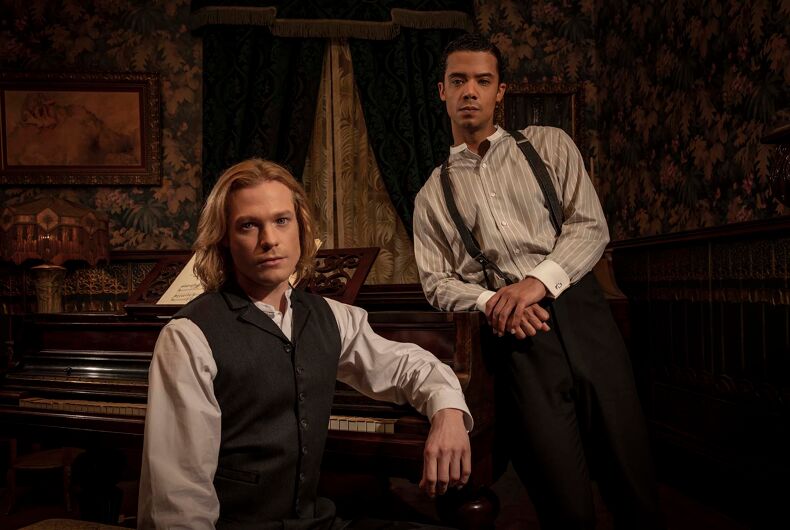 Sam Reid and Jacob Anderson in 'Interview with the Vampire'Photo: Pari Dukovic/AMC

AMC launches its Anne Rice extended universe this weekend with the premiere episode of Interview with the Vampire. This latest adaptation of Rice’s 1976 novel is a significant and very gay departure from the book, turning the homoerotic subtext into actual text and placing much of the blood-sucking action in the early 20th century.

That description is sure to have fans of Rice’s Vampire Chronicles a little nervous. But what are critics saying about the new series?

Variety’s Caroline Framke praised the update for adding new layers to the story by casting Game of Thrones alum Jacob Anderson as the titular vampire.

“AMC’s Interview With the Vampire deliberately reframes Louis’ story from that of a restless plantation owner to one of an ambitious, closeted Black man who sees a whole new world of possibility in the undead life Lestat (Sam Reid) offers. Given more time to tell this story in episodic installments, and with the captivating Anderson embodying Louis through his every wavering mood, the show forges a powerful story of identity that will be both familiar to any Rice fan and feel much different than versions that came before,” Framke writes.

“What Lestat promises, as embodied with suitable grandiosity by Reid, is a world in which neither his Blackness nor his queerness pose a bodily threat. In recasting Louis’ character in this way, AMC’s Interview With the Vampire becomes newly rich with storytelling possibilities.”

“Unapologetically queer, unafraid to wreck the source material while still managing to preserve its bones, and exceptionally detailed in its creative production,” Codega writes, “the show takes the original work and holds it up to the sunlight, letting the skin and flesh burn until all that’s left is something bright, polished, and undeniably gruesome.”

“There’s something lost in the mission to destroy the innuendo for the sake of fully overt representation,” Bramesco writes. “Erasing the element of suggestion proves a blessing and curse on par with the vampiric germ, making way for the bracingly graphic and just plain obvious alike.”

Praising Anderson and Reid’s chemistry and series’ willingness to turn Rice’s melodrama into something of a “gay rom-com horror,” he writes that Interview with the Vampire “blends swoony Southern Gothic with cadaverous relationship farce, though it struggles when it shifts its gaze from the intriguing main characters.”

The Hollywood Reporter’s Daniel Fienberg gave the series points for “taking a dehumidifier to some of Rice’s swampier prose.”

However, he wonders whether the show’s reinvigorating sense of camp might turn off hardcore fans of the source material: “Any time you think Interview with the Vampire is on the verge of becoming too chilly — and a strict Rice adaptation should feel like a simmering dip in the bayou — you get a burst of over-the-top gore or floating, butt-bared sexuality extreme enough to evoke giggles that are probably intentional (but might not always be),” he writes.

“Overall, it’s a promising start with many appealing elements to chew on in the meantime.”