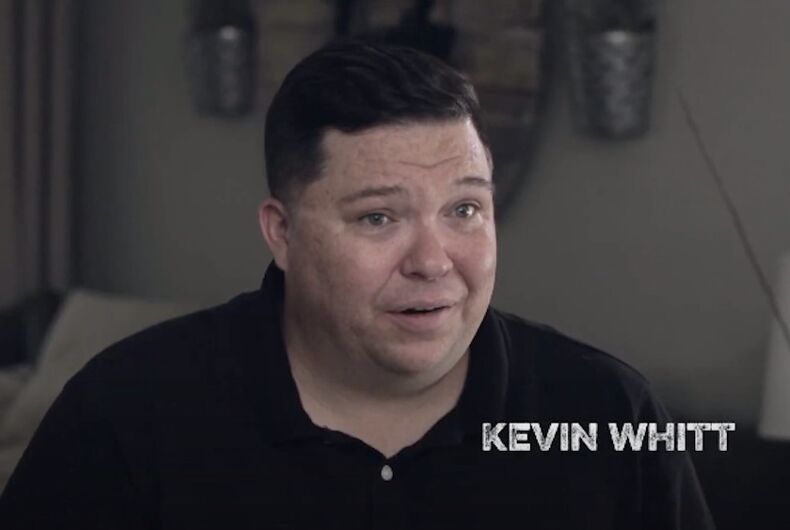 Kevin Whitt, a conservative anti-trans activist aligned with a far-right hate group, has been mocked on social media after expressing disappointment with Christians who condemn homosexuality above other “sins” like pornography, pre-marital sex, and adultery.

“Ok, so many Christians are real quick to say g a y people will ‘burn in hell for eternity’ BUT they never want to talk about the people who are not married living together having S E X, or committing ADULTERY, or the ones who have gotten DIVORCED,” Whitt wrote in a public Facebook post.

Whitt wrote that church attendees and religious leaders regularly participate in other sins like gluttony, greed, and lust, adding, “But no one wants to talk about that!”

Whitt then wrote, “Straight people have no idea what it’s like to live in a body u don’t feel comfortable in and attracted to a person that if you dare to love ur told you are going to burn in hell for all of eternity!!”

He added that many gay people feel frightened into trying to convert to heterosexuality over threats of eternal damnation. “No one would choose to be g a y, it’s NOT a choice,” he wrote, adding, “I do believe it’s the effects of neglect and abuse as a child.”

In response to Whitt’s Facebook post, Texas Tribune reporter Steven Monacelli wrote on Twitter, “Kevin Whitt, a gay former Texas GOP staffer who was fired after attending J6 and has made a name for himself as an anti-trans activist, now appears to be feeling some of the homophobic heat that is part and parcel of anti-trans activism. A real face-eating leopard moment.”

Monacelli’s tweet included an image of “The Leopards Eating People’s Faces Party,” a meme that mocks those who align themselves with hateful causes but think its supporters will never turn against them. The meme is often used to mock Republican Party supporters who express shock when they themselves are harmed by the party’s policies.

Kevin Whitt, a gay former Texas GOP staffer who was fired after attending J6 and has made a name for himself as an anti-trans activist, now appears to be feeling some of the homophobic heat that is part and parcel of anti-trans activism. A real face-eating leopard moment. pic.twitter.com/x61b2NC70p

Whitt, a former drag performer who failed to qualify for RuPaul’s Drag Race, identifies as “ex-gay” and “ex-transgender.” He has said that God showed him his “true identity” as a cisgender, straight man, and his “desires to do drag, party, or have sex lessened.”

He was fired from his role as a field organizer for the Texas Republican Party after participating in the January 6, 2021 riot at the U.S. Capitol. He appeared in anti-trans campaign ads in 2020 that implied then-candidate Joe Biden supports “sex change surgeries at 15 years old.” He traffics in conspiracy theories of parents forcing their kids to be trans.

Whitt has worked as a director of Mass Resistance, a Southern Poverty Law Center-certified hate group that considers gay people dangerous to kids and has accused LGBTQ+ activists of “trying to get legislation passed to allow sex with animals.” He has spoken near the site of the Pulse nightclub shooting to publicly campaign against conversion therapy bans, has called Jesus his “conversion therapist,” and has protested Drag Queen Story Hour events.

He also visited D.C.’s Comet Ping Pong pizza where he claimed in a video that the gay-owned “restaurant is known for pedophilia,” a conspiracy theory known as Pizzagate.

Did George Santos flash a white nationalist sign on the floor of Congress?