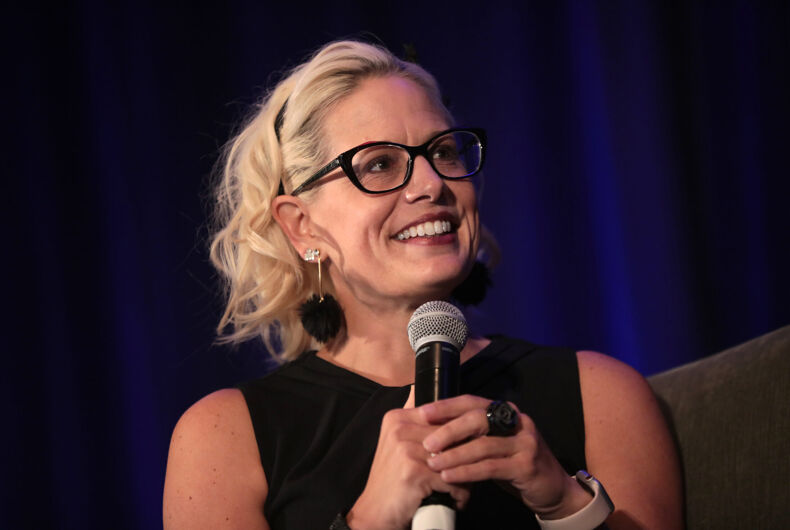 Most Arizona voters disapprove of Sen. Kyrsten Sinema (I-AZ) after she left the Democratic Party late last year, a new poll shows, making her one of “America’s most unpopular senators.”

A new survey from the market research firm Morning Consult found that majorities of registered Democratic, Republican, and independent voters in Arizona all disapprove of the bisexual senator.

While a majority of all voters disapprove of Sinema, the survey also found that, after leaving the Democratic Party, her approval ratings actually went up 5 percent among Republican voters and 13 percent among independents.

This makes sense considering that Sinema is now registered as an independent, giving such voters a candidate to rally behind.

Sinema has long been a favorite of Republicans as well. She has long fancied herself a “moderate” who championed “bipartisanship.” She has regularly opposed Democratic hopes of reforming Senate filibuster rules in order to expand voting access and other civil rights.

For the same reasons, Sinema is immensely disliked among Democrats. The Arizona Democratic Party voted to censure Sinema in January 2022, citing her failure to help pass federal voting rights legislation. Arizona Democrats also blasted her for being “noticeably absent” on the campaign trail during the 2022 midterm elections.

Usually, a state’s senior senator will appear at campaign events for members of their party running for the U.S. House and state-level offices even if they are not up for reelection themselves, but Sinema didn’t even appear at a major campaign event with former President Barack Obama.

Although Sinema hasn’t yet announced a re-election bid for 2024, Arizona Democratic Reps. Ruben Gallego and Greg Stanton are both expected to run for the state’s U.S. Senate seat. If she also runs, she’ll likely face a three-way contest alongside a Democrat and a Republican in the general election.

Her unpopularity makes her a longshot re-election candidate, but she could peel off enough votes to help ensure that an anti-LGBTQ+ Republican ends up in the Senate, something that would make her even less liked by Democrats than she already is.