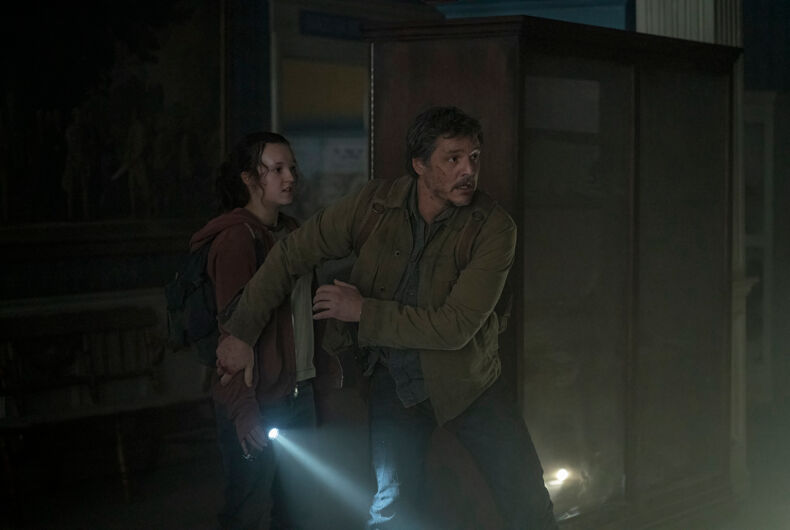 Bella Ramsey and Pedro Pascal in The Last of UsPhoto: Liane Hentscher/HBO

One of the most highly anticipated new series of 2023, HBO’s The Last of Us premieres Sunday night. It has the odd distinction of being a prestige TV show based on, of all things, a video game—albeit a video game that has been lauded for its emotionally resonant storyline.

The series, like the game, is set in a post-apocalyptic world in which a fungus—inspired, rather disturbingly, by the real Ophiocordyceps, which takes over the bodies of ants—has turned much of humanity into monstrous, blood-thirsty creatures. The action centers around a traumatized smuggler named Joel (Pedro Pascal) and the 14-year-old orphan, Ellie (Bella Ramsey), who he’s tasked with protecting on a perilous journey. Ellie is immune to the fungus and represents humanity’s last hope of survival.

The show, like the game, is also notable for its LGBTQ+ inclusion. Ellie is canonically queer, as are side characters Frank (Murray Bartlett) and Bill (Nick Offerman), whose stories reportedly get fleshed out in an episode devoted entirely to their relationship.

Early buzz about the show has been glowing, so let’s look at what the critics are saying about The Last of Us.

In his review, New York Times critic James Poniewozik compared the show favorably to the long-running zombie apocalypse series The Walking Dead, writing that where that show descended into increasing nihilism, The Last of Us has a refreshingly hopeful take on its human survivors. He praised Ramsey’s performance, as well as the episode devoted to Bartlett and Offerman’s characters. “The episode advances the plot only marginally, but it throws the show’s range wide open. This is an apocalypse story in which you will be allowed to feel and even laugh.”

NPR’s Glenn Weldon agrees in his review that the Offerman/Bartlett episode (i.e. the gay one) is a highlight. The show may be packed with familiar genre tropes, he writes, “But by allowing the monsters to serve chiefly as catalysts to the complex emotional reactions of its characters, The Last of Us accomplishes what Station Eleven did last year. It’s a hopeful show about the end of humanity — one that manages to find, and nurture, moments of grace amid the ruins.”

“Even if The Last of Us treads familiar ground,” writes Vulture’s Jen Chaney, “it is still a gripping and ambitious work that seems fated to become the premium cable network’s next Twitter-trending hit.” She also praised the show’s judicious use of a filming style similar to many first-person video games. “Fight scenes and gun battles are filmed as if the viewer is looking through the eyes of the character delivering the blows or pulling the trigger. This approach is deployed just often enough to add a sense of immediacy without feeling too much like a gimmick.” The Last of Us, she writes, is at its heart a study of relationships. Again, Chaney singles out Episode 3 as the season’s best. “How much [Bartlett and Offerman’s characters] grow to love each other is treated with the same import as whether or not they can continue to survive; that’s because The Last of Us is equally as interested in showing us the freaky details of this fungal environment — the spores that emanate from human mouths are both fascinating and terrifying — as it is the beauty of normalcy carved out of abnormal times.”

Reviewing the series for Rolling Stone, Alan Sepinwall writes that The Last of Us improves as it sloughs off the visual language of the original video game after the first episode. Series creators Craig Mazin and Neil Druckmann, writes, “soon begin to go deeper on these characters, and have assembled such a terrific group of actors to play them, that The Last of Us becomes at least as engrossing in its quiet moments as in its scary ones — and arguably more so when it’s just focusing on who these people are rather than the dangers they are running from.”

In a slightly less favorable review, Time’s Judy Berman criticized the show for having a “meaning-shaped hole in its otherwise robust story.” The Last of Us “is by turns gorgeous and harrowing, brutal and warm. From the performances to the storytelling to the aesthetic elements, it’s an exquisitely made adaptation. But it also asks viewers to absorb a whole lot of human misery without saying much that we haven’t already heard in similar shows,” Berman writes. “What’s the point of putting yourself through so much vicarious suffering, at a time when everyday life offers plenty of the real thing, if you’re not going to come out the other side any wiser?”

On the other hand, Los Angeles Times critic Lorraine Ali writes that The Last of Us is in a league of its own. “Permeating the writing, production and performances are an underlying beauty and grace that make navigating the grim realities of this decaying world a little less horrific.”