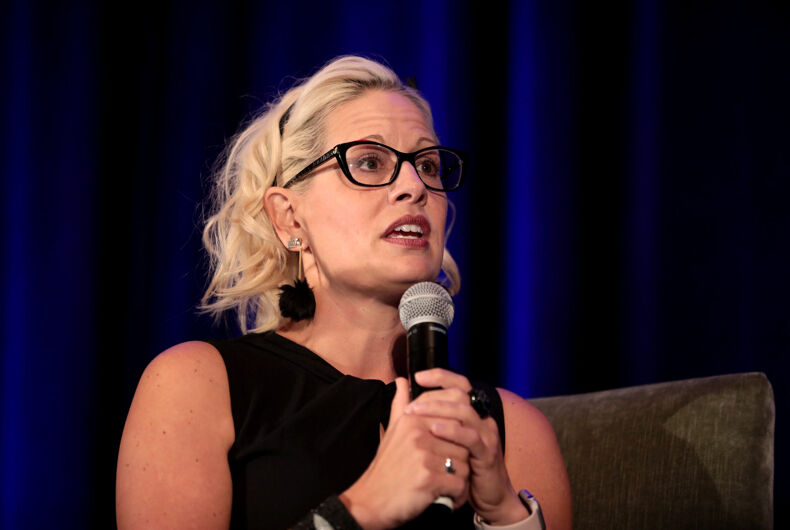 Former President Barack Obama spearheaded a rally in Arizona last night in an effort to promote Democratic candidates in the state – and noticeably absent from the event was Arizona’s out Democratic Sen. Kyrsten Sinema (D-AZ).

Daily Beast reporter Sam Brodey confirmed on Twitter before the rally that Sinema’s office said she would not be attending, though Brodey did not say if they gave a reason.

Perhaps it is because she is universally detested by Democrats, Republicans, and independents alike.

A recent poll of 1,300 likely Arizona voters, conducted by the bipartisan polling team Fabrizio Ward & Impact Research, found that the Senator’s unfavorable ratings were remarkably the same across party, age, race, and education.

The poll found that 57% of Democrats have an unfavorable view of Sinema, and 54% of Republicans and 51% of independents also have a poor opinion of her.

“Left-wing vitriol aimed at Sinema is a gusher on the internet,” Arizona Republic columnist Phil Boas noted. “She is probably the most detested politician in the country today

Since taking office, Sinema has disappointed many with her continuous efforts to block Biden’s agenda. In addition to refusing to support filibuster reform, she also would not get on board with his Build Back Better plan.

She also recently voiced her belief that the Senate should reinstate the 60-vote threshold to confirm executive and judicial nominees, an opinion that MSNBC correspondent Lawrence O’Donnell subsequently ripped to shreds, accusing her of “follow[ing] the indefensible with the crazy” in her explanation.

At the rally, Obama presented a grim message of what’s at stake in this election. With the number of GOP election deniers on the ballot – including Kari Lake for Governor, Mark Finchem for Secretary of State, and Blake Masters for Senate – he reportedly warned that “democracy as we know it may not survive in Arizona” and said, “If you do need one more reason to vote, consider the fact that our democracy is on the ballot. And nowhere is that clearer than here in Arizona.”

The Democratic candidate for governor, current Secretary of State Katie Hobbs, also spoke at the rally, reminding voters that she refused to be intimidated by election conspiracy theorists when tasked with certifying the 2020 election for her state.

“I stood for democracy when I refused to give into the insurrectionists who surrounded my home after I certified the 2020 election,” she said, “and I’m still doing it today in this race for governor.”

One Republican also spoke at the rally, Mesa Mayor John Giles, who said he couldn’t stand by the Republican candidates as they continued to deny the results of the 2020 election.

“Always put country and state over party,” he said.

Gay penguins are back together just in time for mating season

Quieter queer spaces are worth protecting too