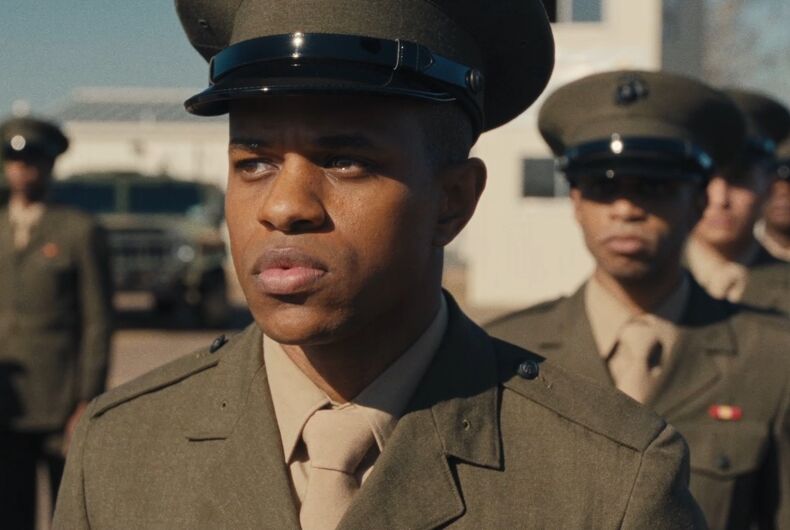 Photo: Courtesy of A24

Tony and Emmy-nominated actor Jeremy Pope is up for both an Independent Spirit Award and a Golden Globe for his performance in The Inspection as a gay Marine Corps recruit. Now, the 30-year-old says he was able to take the role in the indie film (which is based on director Elegance Bratton’s real-life experience) because he walked away from a major studio project.

“The short version is: I’d been given an opportunity to lead a studio film. And even though I didn’t love the script, it meant something. But it was one of those things that would get me in the conversations, get me in front of directors and people at studios,” Pope says in a new interview with Variety. “As people know, that is currency and helps where the comma on your check goes and the opportunities you’re given.”

Pope explains that mere days before filming on the unnamed project began, he ended up in what he describes as an “interesting conversation” with the film’s director.

“He basically said I didn’t have the ability to connect with a female character because I was gay,” Pope reveals.

“In the moment, I was negotiating how to defend myself. But at the end of the day, that spoke so much more to where he was at and his journey in life versus who I am or what I know I bring to a project. So it was the first time where I go, ‘Am I going to say no? Am I going to leave this?’ And I had to choose myself and serve myself and say I can’t be in an environment that doesn’t support and pour into me the way I’m going to support and pour into it. I’ve spent many years doing a lot of really great projects, usually that don’t pay you much, but it’s because people are honest and open and vulnerable and they’re there to take care of the art.”

“So I had to say ‘eff that energy’ because it’s going to take too much from me,” Pope, who also starred in the Ryan Murphy Netflix series Hollywood, continues. “And literally in that same breath of knowing that don’t serve me is when the phone rang and it was ‘A24 wants to have this conversation about The Inspection.’ It was like I had to be tested to really know my worth and affirm myself. This is exactly where I’m supposed to be. So it was just I had to go through that and understand my worth and my existence and how I want to show up in this business and what I’m willing to tolerate and not tolerate. So I think, like I said, life has to do life’s thing.”

Pope goes on to discuss how difficult it was to make that decision as an out Black actor trying to make a name for himself in Hollywood.

“It was a tricky one,” he says. “I never want to be perceived as hard to work with. You know how this business works. Especially when you’re part of a marginalized group, you get an opportunity, you don’t want to f*ck this up. But it wasn’t serving me. Again, I know what I bring to the table. I show up for my scene partners, the story, the craft. I come from the theater so I’m about that work life. For someone to make me feel otherwise… I was just tired of negotiating my worth.”

As Variety notes, Pope is currently playing the artist Jean-Michel Basquiat on Broadway opposite Paul Bettany as Andy Warhol in The Collaboration. He’s set to reprise the role in a film version of the play due out this year, and will also star as Sammy Davis Jr. in an upcoming film co-written and directed by Pose executive producer Janet Mock.

Life
A24, Elegance Bratton, Hollywood, Jeremy Pope, out actors, The Collaboration, The Inspection

Conservatives are outraged that Joker gets pregnant in latest Batman comic