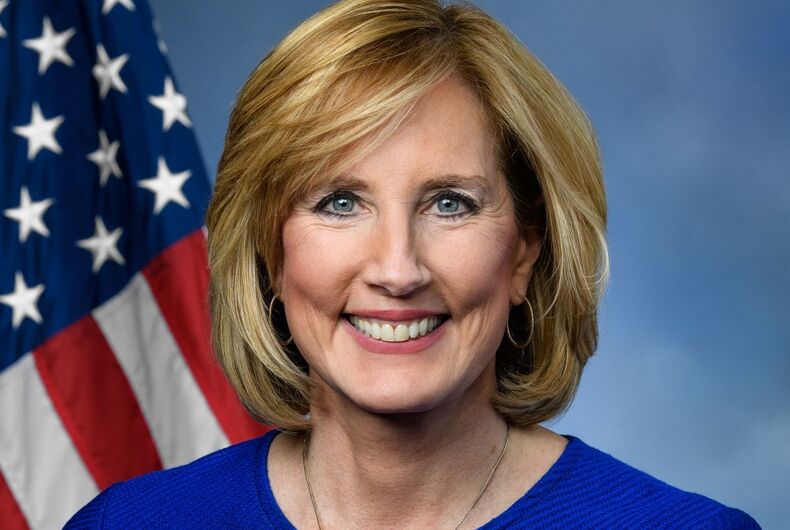 House Republicans are either denouncing or cozying up to out Rep. George Santos (R-NY) as his entire life story has been found to be a series of lies. But one GOP lawmaker is taking a novel approach.

In December, merely weeks after becoming the first out gay Republican elected to Congress, Santos’s life story came crumbling down. Multiple news reports said that there was no record of him attending the elite high school he said he attended or Baruch College and New York University, where he claimed to have gotten degrees. Citigroup and Goldman Sachs – the Wall Street banks he claimed to have worked for – had no record of his employment. Even his charity “Friends of Pets” was registered nowhere.

Santos admitted to many of the lies, calling them “fluff” on his resume, but he denied criminal behavior.

Rep. Claudia Tenney (R-NY) said, according to Raw Story, that it’s Biden’s fault because he “sets a bad example for young people like George Santos.” Santos is 34 and his trouble with the law – at least with Brazilian law – started well before Biden’s presidency. Santos’s first, failed campaign for Congress also occurred before Biden was president.

“I don’t think he’s going to run again,” she said, saying that she feels bad for Santos because it’ll be hard for him now that his lies have been exposed.

“But we’ll have to wait to see if the Ethics Committee can track him and his, you know, financial issues, I think they’re looking at his financial situation and what did he disclose in terms of — that’s the legal and not the other part,” she said. She was referring to the multiple ethics complaints filed against him which have focused on irregularities in his financial disclosure filings and campaign finances, including a $705,000 loan he gave his campaign last year despite declaring an income of $55,000 in 2020 and not disclosing the names of any clients who paid his business over $5000 in 2021 and 2022.

Tenney said that ethics don’t matter in politics because there are people like Biden but didn’t explain further.

Her comments are similar to those made by Rep. Marjorie Taylor Greene (R-GA) in December. Greene defended Santos, saying that Democrats have lied in the past so it’s not immoral for Santos to have made up an entire life history. Many of her examples of Democratic lies were themselves lies, including an accusation that Rep. Ilhan Omar (D-MN) married her brother and lied about it, which is not true and is a disgusting rumor made up by the far-right to attack the Black and Muslim Congresswoman.

Last November, Tenney faced criticism for sharing a “cruel” fake image mocking former Speaker Nancy Pelosi’s (D-CA) husband Paul Pelosi. The image she shared showed five white men in shorts with short haircuts holding oversized hammers photoshopped in front of a house that many on the right believed was connected to the person who attacked Paul Pelosi last year in his home. If one perused the comments under the image, one would find that many conservatives believe that these men are what gay men generally look like.

“LOL,” Tenney wrote when tweeting the image, which was part of a rumor at the time that Pelosi is actually gay and was in a sexual relationship with the man who attacked him. There was no reason to believe either of those claims.