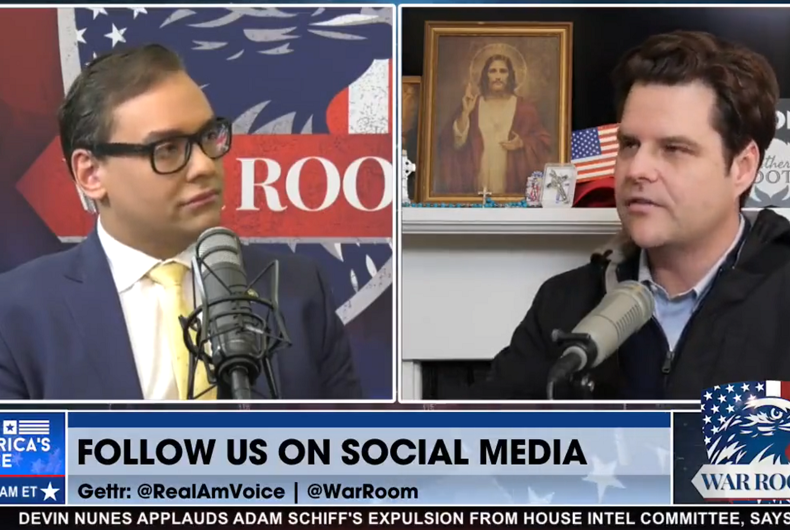 Out Rep. George Santos (R-NY) is speaking out in his own defense, claiming that he has led an “honest life.”

In December, Santos was found to have lied about his entire life story. He didn’t go to Horace Mann High School, Baruch College, or New York University as he claimed; his charity Friends of Pets was never registered; he hasn’t been able to substantiate his claimed family connections to the 9/11 attacks and the Holocaust; and he even lied about being a star volleyball player in college.

Reports of the lies came out after he had won his election to the House of Representatives, and he admitted to many of the lies, calling them “a little bit of fluff” on his resume.

But he says he still thinks of himself as fundamentally honest.

On Steve Bannon’s War Room podcast, Rep. Matt Gaetz (R-FL) – himself no stranger to legal troubles – asked Santos about one of the many campaign finance questions being raised about his 2020 and 2022 campaigns in multiple ethics complaints: if he declared an income of $55,000 in 2020, how did he have the funds to loan $705,000 to his own campaign in 2022? Most people making around the median U.S. salary don’t have almost a million dollars lying around to give to political campaigns.

“That is an answer!” Gaetz responded, even though it really wasn’t. Gaetz rambled a bit but then he pressed Santos: “When you donated that money to your campaign, is there anything else you can say about the work you did that was the origin of those resources?”

“Look, I’ve worked my entire life, I’ve lived an honest life, I’ve never been accused/sued of any bad-doing,” he said. That is a lie. In 2008 Santos allegedly wrote bad checks using a checkbook that belonged to one of his mother’s elderly patients to buy clothes. When the checks were discovered to be fraudulent, the store took the money Santos allegedly stole out of a clerk’s wages. Santos promised to pay the clerk back but never did, and earlier this month that clerk called Santos “a professional liar.”

Santos faced charges related to those accusations and even signed a confession in 2010 before coming to the U.S.

“It’s the equity of my hardworking self that I’ve invested inside of me,” Santos told Gaetz, again not answering the question. “Like I said, didn’t come from Barisma, it didn’t come from Ukraine, Russia, China, unlike some folks that we all know that get money from those sources.”

Gaetz then moved on, possibly, as the New Republic put it, filled “perhaps with second-hand embarrassment after watching Santos fumble even the most generous lay-up opportunity.”

George Santos says he has "lived an honest life" in the same breath as a refusal to answer questions about where the money he used to give himself more than 700k in campaign loans came from. pic.twitter.com/AU1fSqLvSK