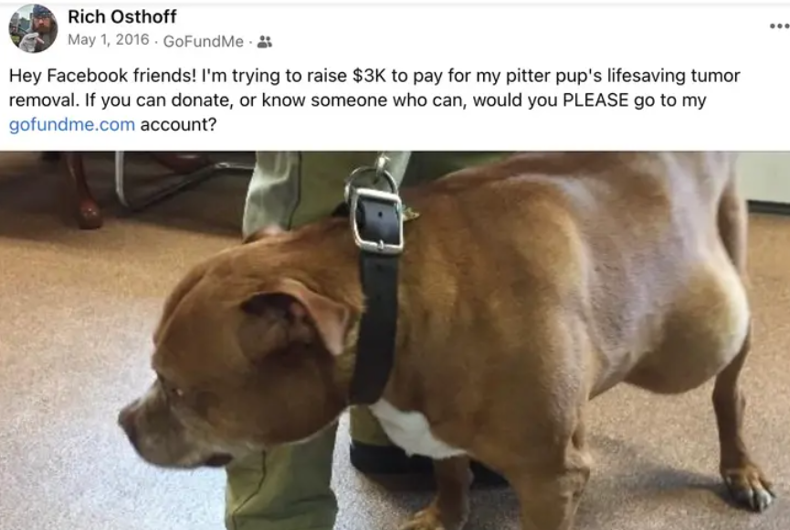 The accusations of lying, campaign finance misdeeds, and thieving against Rep. George Santos (R-NY) keep mounting. The latest accusation is that he stole money from a disabled veteran’s dying service dog’s GoFundMe.

U.S. Navy Richard Osthoff was living in a tent in an abandoned chicken coop in New Jersey, according to Patch, with his service dog Sapphire. Sapphire developed a stomach tumor and needed surgery that Osthoff was told would cost $3000 in 2016.

He couldn’t afford the surgery, but he said that a vet tech told him that he knew of “a guy who runs a pet charity who can help you.” He was referring to Santos, who claimed he ran the charity “Friends of Pets” for years. The charity would be one of the first of Santos’s dubious statements uncovered by the New York Times in December 2022, after Santos was elected to Congress; there is no record of the charity ever being registered.

Osthoff said that Santos – who was going by the name Anthony Devolder at the time – helped him start a GoFundMe to raise money for the dog in May 2016. The fundraiser met its $3000 goal “and then some,” Osthoff said, but Santos said he wouldn’t use the money to pay for the surgery at the New Jersey veterinarian Osthoff regularly went to and instead told Osthoff to go to a different practice in Queens, New York.

“It was a tiny little hole-in-the-wall place, but looked legitimate,” Osthoff said. “The vet there said they couldn’t operate on the tumor.”

He said he didn’t understand because the New Jersey veterinary practice said they could operate on the tumor. He tried to contact Santos, but he stopped regularly answering calls and texts.

“I’m starting to feel like I was mined for my family and friends donations,” Osthoff wrote in a November text message. He and Santos talked on the phone one last time where Santos allegedly said Osthoff “didn’t do things my way” and said he wouldn’t use the money for the surgery.

“My dog is going to die because of god knows what,” Osthoff wrote Santos in a November 13, 2016 text message. “I’m sick of being jerked around. I’ll take her to another vet, but that cash was raised on her behalf.”

“Remember it is our credibility that got GoFundme them seves [sic] to contribute,” Santos replied. “We are audited like every 501c3 [sic] and we are with the highest standards of integrity.”

“We do not drive people around nor do we give them rides,” Santos wrote. “We transport ANIMALS in NEED not needy owners!”

“Sapphire is not a candidate for this surgery,” Santos continued. “The funds are moved to the next animal in need and we will make sure we use of resources [sic] to keep her comfortable!” Osthoff posted about it on Facebook later that day.

“To everyone who helped me and Sapphire raise money for her surgery, I’m sorry to say that we were scammed by Anthony Devolder…. and Friends of Pets United FOPU,” he wrote. “Through a series of bad veterinary contacts, and subterfuge regarding payment, Sapphire has NOT received veterinary care and her growth is 3 to 4 times bigger than it was when the campaign was fulfilled. She is facing euthanasia within months.” Santos stopped responding to Osthoff then. Osthoff said he tried to contact GoFundMe but never got a response from them.

Sapphire died the following January. Osthoff said he “had to panhandle” to pay for her euthanasia and cremation.

“It was one of the most degrading things I ever had to do,” he recounted.

Another veteran, Michael Boll, helped Osthoff with the matter at the time and confirmed the story.

“I contacted [Santos] and told him, ‘You’re messing with a veteran,'” he said, adding that he told Santos “that he needed to give back the money or use it to get Osthoff another dog.”

Boll said Santos was “totally uncooperative” and told him that he planned to use the money to help other animals.

“I told Rich to go to the police, but we had limited information” about Santos, he said.

While Friends of Pets was never registered, it did have a Facebook group that was created in 2015 and archived in 2020. The name of the group was changed to “The End.” One of his coworkers said she remembers the Facebook group and that Santos would regularly post links to fundraisers for animals that needed medical care on it.

Santos is not commenting on the matter.

This isn’t the first time Santos has been accused of stealing.  In November 2010, Santos’s mother, a nurse, told police in Brazil that she had the checkbook in her purse and that it belonged to Delio da Camara da Costa Alemao, a patient of hers. She said that her son stole it and used four checks from the checkbook.

That same month, Santos confessed to stealing “some sheets” from the checkbook, court documents say. He said that he forged the patient’s signature to buy some shoes and some clothes for $1,313.63. He also claimed to be a professor; there is no evidence that he even went to college.

When the checks were found to be fraudulent, the clothing store took the money he stole out of a store clerk’s paycheck. The clerk contacted Santos on social media and Santos promised to repay him. He later left for the U.S. and his case was archived because he was no longer responding to court summons.

“He’s a professional liar,” the clerk said of Santos in a CNN interview earlier this month. “You’re not going to be suspicious of someone who is well-spoken, educated, gentile… He sort of disarms people with those skills so that he can execute those frauds.”

A Brazilian woman named Adriana Damaisceno Parizzi Correia has also accused him of theft. She allowed Santos to stay in her home in New York City in 2011 when he arrived from Brazil and needed a place to stay. She said he didn’t seem interested in finding a job.

After he moved to her Queens apartment, Correia said she began to notice cash missing. When she asked Santos about it, he allegedly blamed one of his cousins.

A man named Yasser Rabello said that, while living with Santos in a two-bedroom apartment in 2012, Santos stole a “very expensive Armani dress shirt” from him and a $500 Burberry scarf from their fellow roommate Gregory Morey-Parker. Morey-Parker allegedly saw Santos wearing the scarf in an Instagram photo after Santos announced his 2020 run for Congress, and both roommates said other expensive shirts and items went missing while Santos lived with them.

Morey-Parker also suspected Santos of stealing three checks out of his E*Trade checkbook and trying to cash them for $10,000 each. The checks bounced and Santos allegedly blamed Rabello when confronted by Morey-Parker.

Morey-Parker said he is “100 percent” sure that Santos wore the Burberry scarf at the infamous “Stop the Steal” pre-rally on January 5, 2021, a day before the January 6 Insurrection. Santos had just lost his first bid for Congress in the 2020 election.

In 2014, Santos told Correia to let him hold on to her jewelry because her apartment, he said, was in a dangerous neighborhood. Correia and her daughter say that he never returned the jewelry.

Santos moved in with his boyfriend in 2014. That boyfriend later accused Santos of stealing his phone and broke up with Santos after he learned that Santos had confessed to writing bad checks in Brazil. Brazilian authorities have since re-opened charges connected to the case, though Santos now denies that he ever committed the crime.

Santos has said that he will not resign from Congress. He has admitted to many of the lies about his family history, his education, and his job history, calling them “a little bit of fluff” on his resume. He denies criminal wrongdoing.

But his alleged victims maintain their accusations against him.

“I really felt bad for Rich,” Hoff said. “He has PTSD, and this dog is his lifeline. When I first heard about it, I thought, this is going to kill him.”

“Little girl never left my side in 10 years,” Osthoff said. “I went through two bouts of seriously considering suicide, but thinking about leaving her without me saved my life.”

“I loved that dog so much, I inhaled her last breaths when I had her euthanized.”