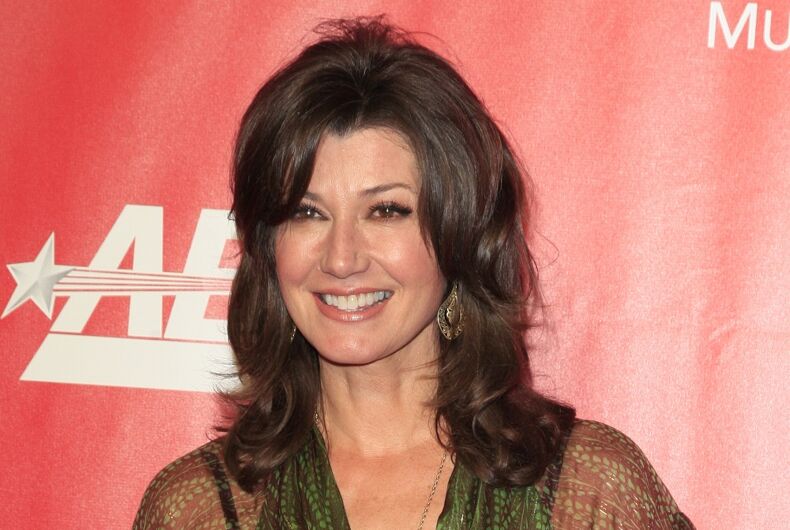 Amy Grant has no time for the homophobic backlash to her decision to host her niece’s same-sex wedding.

This past November, the Grammy-winning Christian pop singer who also received the Kennedy Center Honors last month, spoke to The Washington Post about hosting the nuptials along with husband Vince Gill at their Tennessee farm. She said it would be her family’s “first bride and bride” wedding and recalled her reaction when her niece first came out, saying that it was a gift to her whole family that would widen their experience.

“Honestly, from a faith perspective, I do always say, ‘Jesus, you just narrowed it down to two things: love God and love each other,’” Grant said. “I mean, hey — that’s pretty simple.”

“I own a farm that I bought back in the ’90s and they were just looking for a beautiful place to get married,” she told People Magazine more recently. “So, [my niece] and Sam got married on the same hillside where Vince and I got married.”

“Amy Grant announced that she & her husband Vince Gill are going to host a same-sex wedding on their farm for her niece,” evangelist Franklin Graham, son of the late Billy Graham, wrote on Twitter last month. “Yes, we are to love God & love each other. But if we love God, we will seek to obey His Word. Jesus told us, ‘If you love Me, keep My commandments’ (John 14:15). God defines what is sin, not us; & His Word is clear that homosexuality is sin.”

For me, loving others also means caring about their souls & where they will spend eternity. It means loving people enough to tell them the truth from the Word of God. The authority of God’s Word is something we can never compromise on.

Asked about Graham’s comments and others online, shrugged off the criticism. “I never chase any of those rabbits down the rabbit hole,” she told People. “I love my family, I love those brides. They’re wonderful, our family is better, and you should be able to be who you are with your family, and be loved by them.”

A long-time LGBTQ+ ally, Grant explained her support to Pride Source in 2013. “I know that the religious community has not been very welcoming [to the LGBTQ+ community], but I just want to stress that the journey of faith brings us into community, but it’s really about one relationship. The journey of faith is just being willing and open to have a relationship with God. And everybody is welcome. Everybody.”

Meanwhile, as The Advocate reports, Christian grassroots organization Faithful America has started a petition in support of Grant, which has gotten over 15,000 signatures.

“Love is love, no matter what Franklin Graham says – and social justice Christians can’t just sit back and let powerful members of the religious right rake Amy Grant over the coals for supporting her niece and her relationship.”

“Graham’s words only served to inspire yet more hatred in others,” the petition continues, calling Grant’s decision to host her niece’s wedding “a beautiful act of pro-LGBTQ affirmation from an artist whose music means so much to so many American Christians.”