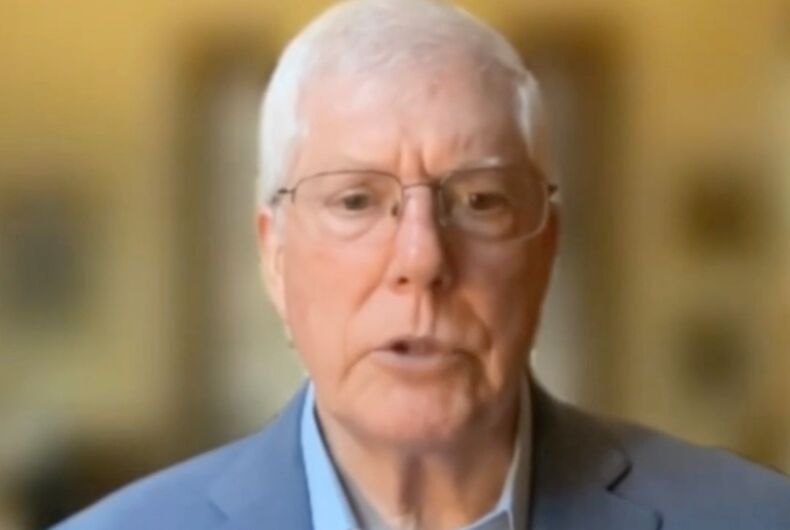 A Christian nationalist is advocating a ban on the children of same-sex couples attending Christian schools.

Radical religious-right activist Mat Staver, who gained national prominence in 2015 when he represented county clerk Kim Davis in her fight to deny same-sex couples marriage licenses in Kentucky, says classmates exposed to the children of same-sex parents may gain positive “personal experience” from the interactions, weakening their commitment to “biblical doctrine.”

“It is a real disservice to put these kids in the situation — particularly in a Christian school that ought to be a safe environment for them — where they can become very confused, and what they experience at that level can be life changing for the rest of their lives.”

Staver told the viewer he would provide “draft language” to deny those kids’ admission, and added a “proper Biblical environment” was essential to protect children from encountering same-sex families.

Exposing children to positive representations of same-sex families is “like putting kids in a viper pit,” Staver explained. “They’re not ready for that. So, I would not do anything that jeopardizes the care and the responsibility that you have to protect those kids, with their parents, and put them in a proper biblical environment that is free of undue influences.”

Staver went on to attribute the recent passage of the Respect for Marriage Act — which requires federal and state recognition of same-sex marriages that have been performed in states where it’s legal — to the positive “personal experiences” of lawmakers who voted in favor of the bill.

“That is the reason why this Respect for Marriage Act passed in the United States Senate. All of those people that voted for it, they were on record that they were in favor of marriage as a union of a man and woman. All of them. Why did they change? We know from some of their staffers, they changed because either someone in their family or people that they know, they found out are homosexual or in same-sex relationships. So, they couldn’t bring themselves to vote for the right thing. They knew what they were supposed to do, but they didn’t do it because of personal experiences.”

Staver recently represented plaintiffs before the Supreme Court in a case accusing the City of Boston of discrimination when it refused to fly a religious flag in front of City Hall. Justice Elena Kagan questioned Staver in oral arguments.

“Suppose a city thinks two things,” Kagan posited. “‘We sort of like this sort of civic organization kind of activity. But, at the same time, we think that there are limits.’ So the city has a policy of that kind, and then somebody comes to it and says, ‘We’d like to put up this swastika on your pole.’ Does the city really have to say yes at that point?”

Answered Staver: “If it’s a designated public forum, I think the answer is yes.”

What does it mean that people suddenly love movie & TV villains?