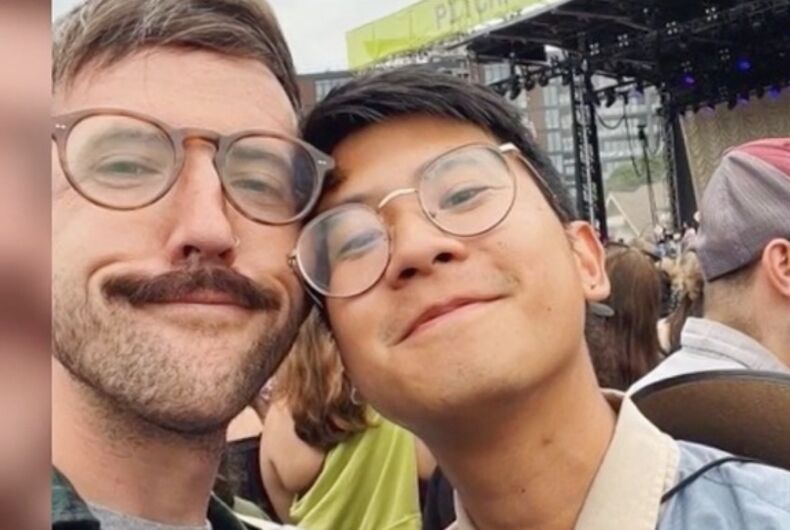 Airbnb is investigating an incident involving a property owner who canceled a gay couple’s reservation request after asking them a homophobic question.

When Curtis Kimberlin Jr. and his boyfriend Jonathan began planning their trip to Dallas, Texas, they sent a friendly note to a property owner offering his place through the short-term rental service Airbnb. But the property responded with a homophobic question before canceling the couple’s reservation request.

“Hi Peter!” Kimberlin wrote to the property owner. “My partner and I will be flying into town for a weekend and we’re really excited. It’ll be my first time in Texas and my partner is from Dallas, so he’ll be showing me around.”

The property owner responded by asking, “So I’ll be hosting two men sleeping together… right?”

Kimberlin immediately tried to cancel his reservation request, but he discovered that the property owner had already done so.

“I was shocked for sure, but I am also somewhat used to having to hide certain parts of myself to calm conservative folks’ reactions to my identities,” Kimberlin told KXAS-TV. “I wasn’t completely surprised, more so disappointed.”

When Kimberlin posted a screenshot of the exchange on Twitter, it went viral. Hilton Hotels reached out and offered the couple free accommodations, which they accepted. Airbnb has said it’s investigating, but the property owner has denied that his actions were homophobic.

Love trying to book an @Airbnb with my bf in Dallas and having this be the first response to our booking. 🙃 pic.twitter.com/vVN9w1UW1P

The property owner, who didn’t disclose his full name, told KXAS-TV that he couldn’t see reviews that other property owners had given the couple. Because Airbnb doesn’t conduct background checks on guests, he said he felt concerned.

“I’m on a fixed income, live alone, and worry about my security,” he told the news station. He didn’t explain why his first response to the couple’s message was about the two men sleeping together.

Kimberlin said that Airbnb eventually contacted him about the incident with what he called a “corporate” response.

“They basically said, ‘We will look into this,’ and left it at that,” he said. “There was no follow-up from Airbnb to let us know what actions they took in response beyond their initial response once my tweet went viral. I truly wonder what would have happened had I not tweeted about it.”

Airbnb has since released a statement, saying, “We enforce a strict nondiscrimination policy, and when a potential violation of this policy is brought to our attention, we investigate and take action, up to removal from our community.”

The company said it suspended the property owner and his listing from its platform while it continues investigating.

A 2014 study found that LGBTQ+ people file public accommodation discrimination complaints at rates similar to those who have discriminated against due to their race and sex.

Ian McKellen talking about “love” just might bring you to tears