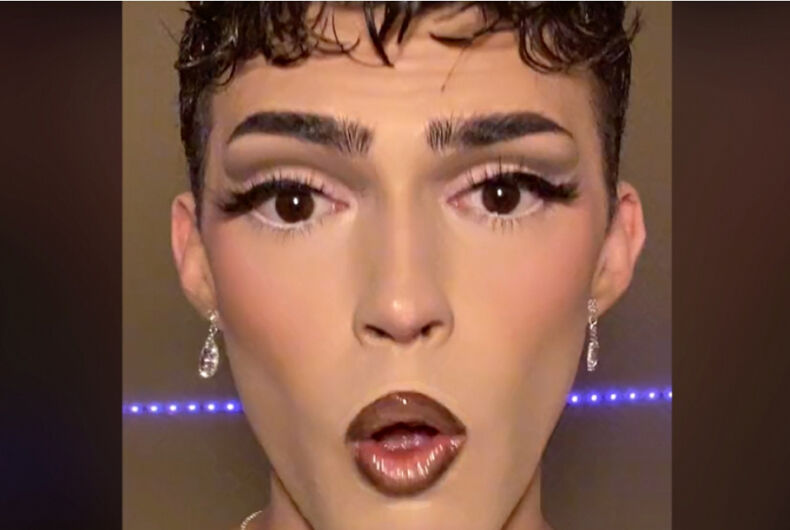 A male TikToker said that a longtime female friend disinvited him from her wedding because he is gay. She told him that his homosexuality and appearance might make other wedding attendees feel “uncomfortable.”

She later re-invited him, he said, but he declined, choosing to throw a celebration for himself instead.

In an October 31 video that now has since been viewed over 6.1 million times, Devin Valeno — a TikToker who shares personal stories and makeup tips — said that he had planned on attending the wedding of his best friend of seven years.

After he confirmed his acceptance of the invitation by text message, she didn’t respond for a week. He assumed she was busy planning the event. But then, a week later, she called him unexpectedly. He answered immediately and expressed excitement about attending. She was “dead silent” in response, Valeno said.

He worried that maybe the wedding had been called off, but instead she said, “About the wedding: Do you think that maybe you could just not wear makeup or anything girly?”

He felt a bit “taken aback” by her request, he said, but told her, “Whatever… It’s your special day! Of course I’ll do that.”

The call ended, but she later called back. When they began speaking, they both enthusiastically mentioned the event. However, she then took on “the bitchiest tone,” he said.

She told him, “So I talked to my dad and well, we discussed it with our family and we collectively thought that maybe you shouldn’t show up to the wedding at all. Just having you know, you and your boyfriend here, and you guys being gay and all, it would really make my family uncomfortable.”

Valeno said that he said expressed surprise that, as his best friend for seven years, she would allow someone to be treated differently just because of who they are.

“An ally of mine is supposed to be an ally of the whole community,” Valeno said. “And if you’re not going to accept me and my man for who we are, then I just don’t think we can be friends anymore.”

She reportedly responded, “I’m glad. I don’t want to be around that type of energy anyways.”

He began to cry.

“This is someone I’ve known and grown to love for years that just threw me aside because of her family’s agenda,” he tearfully said in the video. “It’s 2022, and people will still just throw you out like you’re not s**t just because of the fact that you’re gay.”

This is one of the most personal hate crimes I’ve ever experienced. Wake up It’s 2022 and gay people aren’t going away! #fyp #viral #fypシ

In a follow-up video posted on November 11, he said that his friend called him back and re-invited him.

“I have some really fantastic news,” she reportedly told him. “I really gave it a lot of thought and I decided that you should come to the wedding after all.”

When he waited for more of an explanation, she remained silent. So he responded, “Is that the apology?”

She responded, “No need to apologize to me. Like, I love you so much. We’re good.”

His jaw dropped open in disbelief.

“She didn’t stop there,” Valeno said. “No, she didn’t. She should have, but she didn’t. She says, ‘One last thing before I go: Please no makeup and don’t wear anything that can make my family uncomfortable.'”

He responded, “Since I make everyone so uncomfortable, I decline.” Then he hung up on her.

“In her honor. I’m going to host a wedding for me, by me, on her wedding day,” he told his viewers. “Just to truly show just how much I love and care about myself.”

While commenters were supportive of Valeno and his reaction, he has since posted videos announcing the death of his father and detailing homophobic harassment he has experienced in public.

A 2022 Trevor Project national survey found 73 percent of LGBTQ youth reported experiencing discrimination based on their sexual orientation or gender identity at least once in their lifetime.

My husband and I spent last Christmas in Croatia. Here’s what we learned.