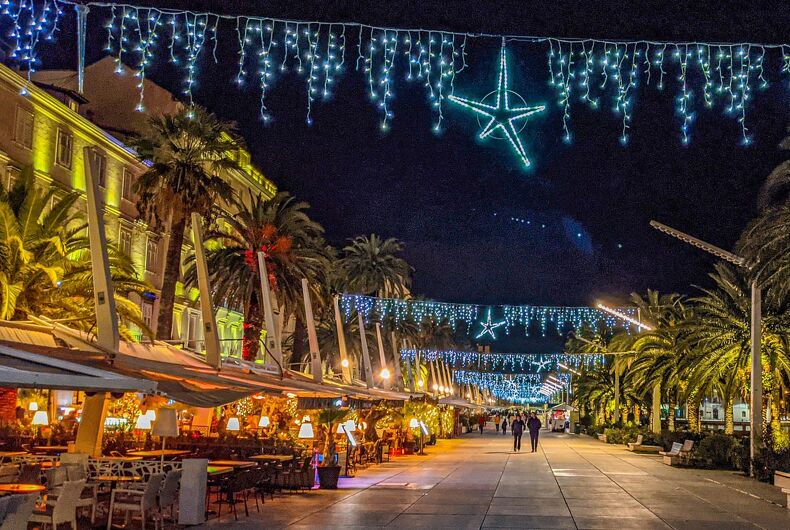 My husband, Brent, and I both love Christmas. Back when we had a house in Seattle, the decorations went up by  Thanksgiving and didn’t come down until January 2nd. We were all about the twinkling lights, fresh pine boughs on the mantle, the soundtrack to A Charlie Brown Christmas, and – oh! Soy nog, since I’m lactose intolerant. Even Brent says it’s surprisingly close to the real thing.

From “Feliz Navidad” to “Sretan Božić”

For our first two years as nomads, we returned to Seattle to celebrate the holiday with friends and family. Then Covid hit and there wasn’t much point in going back, so we spent that first Covid Christmas in Puerto Vallarta, Mexico. Last year we spent it in Split, Croatia. (This year we’re in London. Look for a report on that very soon!)

We’d rather be with friends and family, but we’ve also enjoyed seeing how other cultures celebrate Christmas. In fact, appreciating these other Christmas traditions feels a bit like Brent and I are starting a new holiday tradition for ourselves.

For instance, in Croatia, “Merry Christmas” is “Sretan Božić.” I’ve practiced saying it but even with my background in the Russian language, I can’t quite get the hang of it.

Alas, just like in Vienna, almost every one of the Christmas carols we’ve heard have been all the familiar ones sung in English.

Still, Croats definitely have their own unique kind of holiday spirit – with, perhaps, less of the crass commercialization of America. As it is throughout Europe, Christmas seems to be less about shopping and buying lots of gifts – and more about, well, eating, drinking, and being merry.

The shops, plazas, and boardwalks are all decorated with lights and decorations, and the sidewalk cafes are packed with folks drinking mulled wine.

Split even has its own Christmas market.

But European Christmas markets are nothing like shopping malls. They’re selling an experience. Yes, they sell some Christmas decorations, along with other holiday-related items, but they’re mostly about the delicious food and drink.

How else is Christmas different in Croatia?

For starters, I’m not sure I ever saw a single Santa – although I’ve since learned there is a Santa-esque being known as Djed Mraz, which translates to Grandpa Frost.

As for Rudolph, there was nary a sign of him and his blinking red nose.

Instead of Santa and Rudolph, look for Advent wreaths and candles. Most Croats are Roman Catholic – and still fairly religious – so Advent and Catholic mass are an important part of the holidays.

On December 13th – St. Lucia’s Day – a small amount of Božićna pšenica, or Christmas wheat, is sown in a bowl. How high it grows by Christmas Day symbolizes how lucky the upcoming year will be.

I asked a local Croatian friend, and she told me the locals really do still do this, and I think it’s a fantastic tradition. Too bad Brent and I missed the cut-off date!

Christmas Eve Day is known as Badnjak, and Christmas Day is called Božić. Trees are typically not set up and decorated until Badnjak, when the Christmas wheat is trimmed and tied up with a ribbon.

Naturally, food and drink are a huge part of the holidays. Croats tend not to eat much during Christmas Eve Day. But come nightfall, the feasting begins, with a meal of codfish, potatoes, and sardines.

Then on Christmas Day, the eating continues with a meal of roasted turkey, duck or goose, accompanied by sarma, which are cabbage rolls stuffed with minced meat and rice. Along the way, they’ll be a variety of sausages and cheeses, and lots and lots of baked goods, such as the fritule, a kind of Christmas doughnut hole; makovnjača, a kind of poppyseed roll; and orahnjača, a sweet walnut roll.

Did you know Croatia is home to the Christmas market voted “Europe’s Best” three years in a row?

Alas, that market was in Zagreb, Croatia’s capital, about 350 kilometers to the north.

We considered making an overnight trip to see this famous market, but in the end we decided against it. So we had to content ourselves with Split’s more modest Christmas market. But it was surprisingly cute!

The market includes lots of outdoor pop-up bars and restaurants, where people can mull over their mulled wine, and enjoy a sausage or two – and maybe some (surprisingly sub-par) onion rings.

The market also included an ice…rink? Actually, it’s more of an ice “path” that winds around the grass in the park.

Split sits right along the Adriatic and rarely experiences a white Christmas. But thanks to a weather phenomenon called the “bura” they do sometimes get a very windy Christmas.

Check out the decorations along Split’s famous waterfront walkway, also known as the Riva, below. And yes, those are palm trees!

Happy holidays wherever and however you are celebrating. And stay tuned for our Christmas in London report coming soon!

The dazzling Christmas markets of Vienna