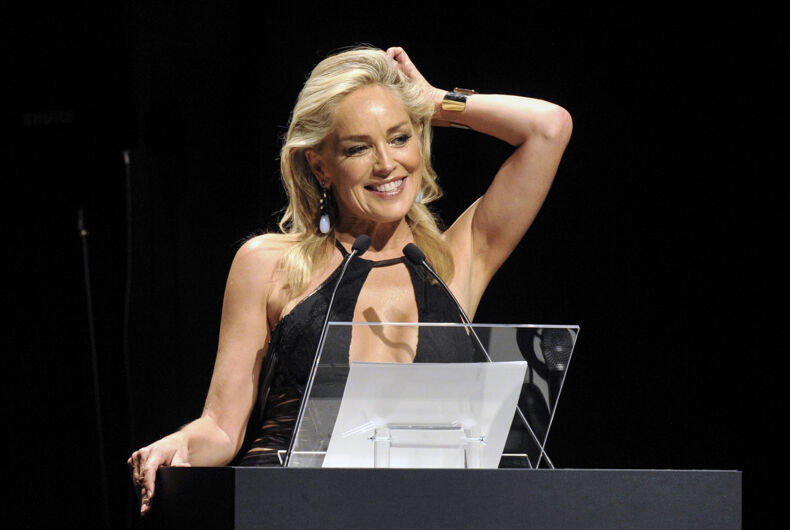 Actress Sharon Stone said she didn’t work for eight years because she supported AIDS research in the 1990s.

During a talk at the Red Sea Film Festival in Saudi Arabia, Stone spoke about replacing Elizabeth Taylor as the chairwoman of the Foundation for AIDS Research, known as amfAR.

At first, she was only asked to stand in for Taylor for one event. But that one event turned into more than two decades of activist work.

When she was first asked to stand in for Taylor, she knew the role could destroy her career. She also knew it was something she needed to do.

“I had no idea of the resistance, cruelty, hate, and oppression that we would face,” she said, according to Deadline. “So, I put on a hazmat suit and I had them show me [the virus] under the microscope. I thought I really need to see this thing that is making everyone go nuts.”

Originally asked to work with amfAR for eight years, Stone said she ended up staying for 25.

“I stayed for 25 years until we had AIDS remedies being advertised on TV like we have aspirin. It did destroy my career. I didn’t work for eight years. I was told if I said condom again, funding would be removed. I was threatened repeatedly, my life was threatened, and I decided I had to stick with it.”

Stone got emotional when discussing the progress that has been made.

“Now 37 million are living with HIV AIDS, living functioning and healthy,” she said.

The Hollywood Reporter has called Stone “one of Hollywood’s most dedicated HIV/AIDS activists.” She even hosted an amfAR event in 2014 that raised $35 million in one night.

“I started my quest for a vaccine and a cure at the request of Elizabeth Taylor when she asked me to fill in for her at amfAR for one night in Cannes,” Stone said in a statement at the time. “That one night became a 22-year commitment of HIV/AIDS work, study and fundraising around the globe and a full understanding of what commitment itself means. I ask all of you to join me in not only honoring this path which Elizabeth forged, but one which we as committed humanitarians must end.”