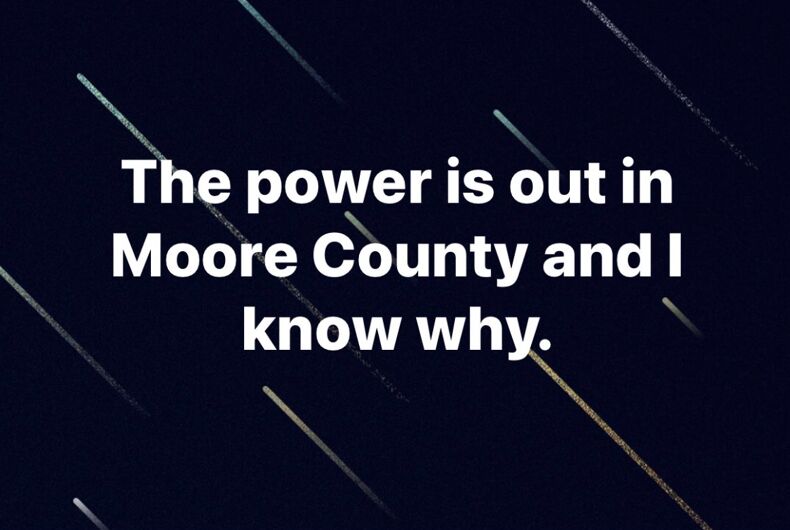 The message posted on Facebook by Emily Grace RaineyPhoto: Screenshot

A North Carolina woman who called for a protest at a local drag show claimed to know why an allegedly “intentional” massive blackout in the state happened during the show, sparking speculation online that she knew power systems were targeted by anti-LGBTQ+ activists. An investigation found that she was not credible.

But Emily Grace Rainey quickly took to social media to proclaim herself the victim, conveniently forgetting that she had claimed to have information about a crime. After adding rightwing podcasts started amplifying her claims and booking her as a guest, now Rainey says she knows who did – “aggressive leftists.”

Around 45,000 people in Moore County, North Carolina, were left without electricity after what authorities call “intentional” and “targeted” attacks on power substations.

Following the blackout, Rainey, a former Army psychological operations officer, wrote on Facebook: “The power is out in Moore County and I know why.” According to WRAL News, Rainey, who was investigated by the Army after leading a group to the rally in Washington that led to the January 6 Capitol insurrection, repeatedly and vehemently protested the drag show. Rainey also posted a photo of the Sunrise Theater, where the drag show took place on Saturday night, writing that “God will not be mocked.”

Rainey later posted that she had been questioned by the Moore County Sheriff’s Office about her post regarding the blackout. “God works in mysterious ways … I used the opportunity to tell [officers] about the immoral drag show and the blasphemies screamed by its supporters,” she wrote.

But now it appears it wasn’t God after all. It was “Christophobic” activists and “aggressive leftists” who did it, and they somehow made it look like it was her.

“Let me lay the scene out for you,” she said on Steve Bannon’s War Room. The show is on QAnon zealot and MyPillow owner Mike Lindell’s Lindell TV. “You have a very quaint downtown of a southern conservative Christian area, and a drag show event coming from Raleigh, called the House of Coxx with the chief performer, Naomi Dix, decides they’re going to do an all-ages drag show in our historic downtown theater.”

“So, like you mentioned, we countered – we mobilized the community, got enough pressure to the point where they finally relented and changed the age from all ages to 18 and up, so our first objective was achieved and we are very happy about that, but we still wanted to protest and pray, because it was inappropriate that such a red light district show was right in a family-friendly downtown, and it was within a thousand feet of a church and school, so these were breaking basic ordinances.”

“So,” she continued, “we gathered, and for two hours, from 5 to 7 p.m., a group of Christians and myself, we prayed over – out front of the theater and read scriptures, Holy Scripture, and prayed, while no less than what was equivalent to an exorcism was happening on the other side of the police tape and the, you know, relentless Christophobic, anti-Christian hate speech being spewed from a group of LGBTQ aggressive activists was, you know, incredibly disturbing, the blasphemies were really just unspeakable, and we were, we – as much as these aggressive leftists want there to be an attack on a drag show, they just can’t seem to get the Christians to attack. Well, maybe it’s just because that’s not what Christian conservatives do.”

“And so, if they can’t have us attack them, they will invent an attack. And that’s what happened next.”

The FBI has joined the investigation after crews responding to the outage found signs of potential vandalism at two sites. Fields said multiple gunshots appeared to have been fired at two power substations, leading to the blackout shortly after 7 p.m. on Saturday.

“The person, or persons, who did this knew exactly what they were doing,” Fields said. “We don’t have a clue why Moore County.” He added that no group has claimed responsibility for the attacks.

The attacks left tens of thousands without power and many without heat on a night when temperatures were expected to dip to the 30s. Cell phone and internet service were reportedly down for most of the county, and school was canceled Monday.