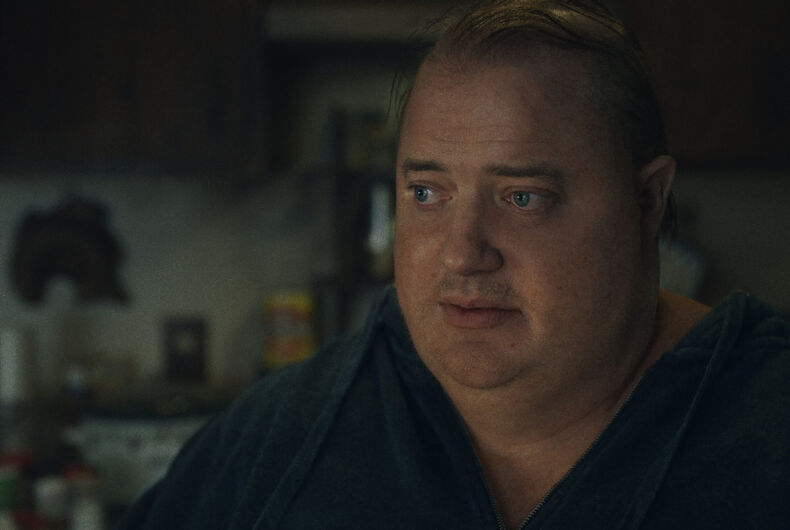 After months of both controversy and plaudits, The Whale finally hits theaters on December 9. The Darren Aronofsky film has been hailed as a comeback for star Brendan Fraser and criticized as fatphobic for its portrayal of his character, and for Aronofsky’s decision to have the actor wear a fat suit rather than casting an actual fat actor.

The film, adapted from Samuel D. Hunter’s 2012 play, is a portrait of Charlie (Fraser), a severely depressed, obese gay man who left his family years ago for his now-dead lover. It centers on the isolated Charlie’s efforts to reconnect with his teenage daughter Ellie, played by Stranger Things’ Sadie Sink.

Fraser received a six-minute standing ovation for his performance after the film’s Venice premiere and is widely considered a contender for a Best Actor Oscar. Many of the film’s positive reviews have focused on what his apparently bravura performance.

In his four-and-a-half-star review for The New York Post, critic Johnny Oleksinski writes that Aronofsky and Fraser work difficult subject matter into something profound. “Fraser, so good, takes what could be a joke, a flat tragedy, or even a lecture about weight and imbues it with gorgeous humanity.”

“Fraser makes us see beyond the alarming appearance to the deeply affecting heart of this broken man,” wrote The Hollywood Reporter’s David Rooney. “In a film about salvation, it’s the inextinguishable humanity of Fraser’s performance that floors you.”

But plenty of critics have also panned the film.

“The film presents us with obesity as tragedy, and as a preventable scourge inflicted on the hero by a hostile and traumatizing world,” writes The New Yorker’s Anthony Lane. Though he praises Fraser for his “soft quizzicality,” Lane notes how the film objectifies his character: “near the start, we are taken on a guided tour of Charlie, circling around him like travelers marveling at a mountain, and there are times when his bulging features, in closeup, all but congest the screen.”

Writing for Vox, Alissa Wilkinson criticized the filmmakers for not understanding the “distinction between a person whose body is large and a person whose body is large and failing because they’re trying to end their own life.” One of the film’s key problems, she writes, is “putting Charlie, whose body size is viewed with repulsion by many of the film’s characters, onscreen to be looked at in a culture beholden to rampant fatphobia that tends to denigrate human dignity.”

Slate’s Dana Stevens found the film “peculiar and often deeply unpleasant.” Again, she describes Fraser’s performance as “admittedly superb” and even suggests a new Oscar category: best performance in a terrible movie. She accuses the film of indulging in “spectatorship as a form of masochism.” “To watch Charlie suffer,” Stevens writes, “is to suffer along with him, but it is also, in a formulation less flattering to the viewer, a way of allowing him to do the suffering on our behalf, maybe even for our entertainment.”

“Fraser is above reproach in his comeback vehicle: His acting is carefully measured and affecting,” writes The Ringer’s Adam Naman. But, he writes, “Aronofsky’s trademark grandstanding sadism, disguised here, as in Requiem for a Dream, Black Swan, and Mother!, as a form of hard-edged empathy for damaged outsiders, crushes the characters and the audience alike beneath its oppressive weight.”

Vanity Fair’s Richard Lawson called the film a “lugubrious chamber drama.” Rather than the empathy the film insists it’s expressing, he writes, what we get “is a kind of leering horror, a portrait of a man gone to catastrophic ruin so that we, in the audience, may tap into our nobler, higher minds and see the worthy human being beneath the frightful exterior.”