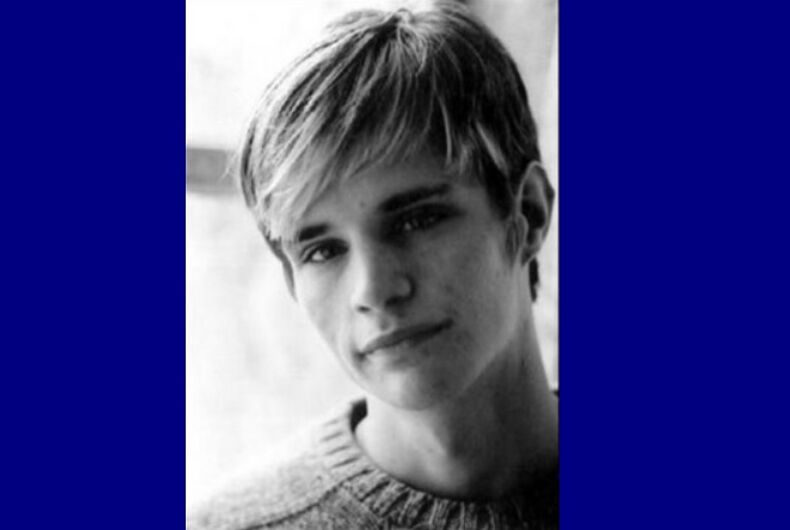 On what would have been Matthew Shepard’s 46th birthday yesterday, the Washington National Cathedral – where his remains are also interred – unveiled a new portrait of him commissioned by the cathedral’s LGBTQ staff.

Shepard was killed in a horrific hate crime due to his sexuality in October 1998 at the age of 21. His murder brought attention to hate crime legislation at both the state and federal levels. President Barack Obama signed into federal law the Matthew Shepard and James Byrd Jr. Hate Crimes Prevention Act in October 2009.

Shepard’s mother, Judy Shepard, has become an advocate for LGBTQ rights across the country and marginalized people everywhere. She and her husband, Dennis Shepard, were present at the unveiling of the new portrait by Kelly Latimore.

In fact, this is the only portrait that has been created of Shepard in collaboration with his parents, according to the Los Angeles Blade.

The portrait features an almost glowing image of Shepard at the center in a blue flannel shirt with his hand on his heart. Surrounding him in a rainbow shape are golden excerpts of letters that people all over the country had sent to Dennis and Judy Shephard after their son’s murder.

Words like “we will grow stronger,” “he was me,” “Matt was kind,” “this can’t keep happening,” “I pray with you,” and “he will be remembered,” form an arch around Matthew Shepard’s image.

Join Washington National Cathedral in remembering the life of Matthew Shepard tomorrow, December 1, on what would have been his 46th birthday. A new devotional portrait of Matthew by Kelly Latimore will be dedicated. (c) 2022, WNC. All rights reserved. https://t.co/f3l3fIPEse pic.twitter.com/cijrHfcZAR

“It’s overwhelming,” Dennis Shepard said upon seeing the portrait. “It shows Matt, it shows the essence of Matt.”

The portrait unveiling was accompanied by an online prayer service hosted by Right Rev. V. Gene Robinson, the first out gay priest consecrated as bishop in the Episcopal Church.

The Very Rev. Randolph Marshall Hollerith, dean of Washington National Cathedral, released a statement emphasizing how much work is left to be done to combat anti-LGBTQ+ bigotry.

“The horrific murders at Club Q in Colorado Springs are a tragic reminder that our LGBTQ friends and family continue to be targeted for who they love, and Matthew Shepard’s legacy reminds us of the urgency to confront bigotry and embrace people of all backgrounds, gender identities, and sexual orientations.”

A separate statement from the Cathedral said called LGBTQ equality “one of the great civil rights issues of the 21st century.”

The Hill reported that Judy Shepard said the portrait was dedicated not only to her son but also to the victims of the recent Club Q shooting in Colorado Springs, Colorado that left five people dead.

“Colorado Springs is the home of some of the most anti-LGBT evangelical forces in the country, so to have the antithesis here in a church representing and caring for Matt is just the exact opposite of what many people feel in Colorado Springs,” she said.

“The Episcopal Church split in the 90’s right from folks who wanted to welcome the community and folks who did not, and this Cathedral was always in the forefront of that movement to welcome everyone. That’s really the essence of what churches are supposed to be, some of them say all are welcome here but they don’t really mean it and this one absolutely does.”

She also wanted to make sure that LGBTQ people knew that “if your religion is really important to you… there are places you can go.”

Is non-monogamy for me?