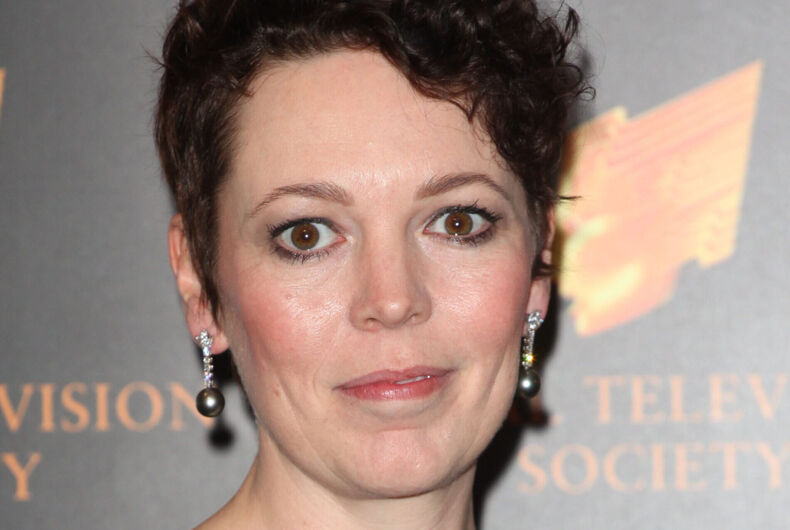 Actress Olivia Coleman has come to the defense of 18-year-old actor Kit Connor after fans essentially forced him to come out as bisexual on social media.

In a recent interview with Variety Coleman expressed her frustration at what happened to Connor.

“I am so proud of him, but I am not proud of how people bullied him. I think people should be allowed to have their own journey. But I’m incredibly proud of him as a young man to deal with all of that and be in the spotlight. It’s unfair. But he’s amazing. He’s a very beautiful human being.”

In Heartstopper, Connor plays a bisexual high school student coming to terms with his sexuality as he falls in love with a classmate.

When asked about his sexual identity in interviews about the series, Connor stated that he wasn’t ready to label himself.

After being photographed on the set of his new film, A Cuban Girl’s Guide to Tea and Tomorrow, holding hands with costar Maia Reficco, fans began accusing him of “queerbaiting.”

The term generally refers to works of art like films or TV shows deceptively implying queerness in order to attract an audience even though that queerness doesn’t appear on screen. Lately, some fans have used the term to refer to people they believe are pretending to be affiliated with the LGBTQ+ community. High-profile personalities like Harry Styles and Cardi B have also faced accusations of queerbaiting recently.

In mid-September, the accusations on Twitter seemingly drove Connor from the social media app.

“This is a silly silly app,” he wrote in a September 12 post. “bit bored of it now, deleting twitter :)”

Connor then returned to Twitter to announce he is bisexual.

“Back for a minute,” Connor wrote in an October 31 tweet. “I’m bi. Congrats for forcing an 18 year old to out himself. i think some of you missed the point of the show. bye.”

Before Connor reached his breaking point, he had publicly criticized those who were asking questions about his sexuality.

“We’re still all so young,” he said of himself and co-star Joe Locke on the podcast Reign With Josh Smith. “To start sort of speculating about our sexualities and maybe pressuring us to come out when maybe we’re not ready… For me, I just feel perfectly confident and comfortable with my sexuality. But I don’t feel the need to really, you know – I’m not too big on labels and things like that. I’m not massive about that. I don’t feel like I need to label myself, especially not publicly.”

The number of fans accusing celebrities of queerbaiting seems on an upward trend as of late, but as LGBTQ Nation writer Catherine Caruso pointed out, the term was originally used to refer to media that markets itself to LGBTQ people by implying characters are queer without ever explicitly making them queer.

Queerbaiting was never meant to apply to people, Caruso continued, and now it is being used to force people out of the closet.

Will Florida Republicans use Disney’s new CEO to roll back their attacks on the large employer?