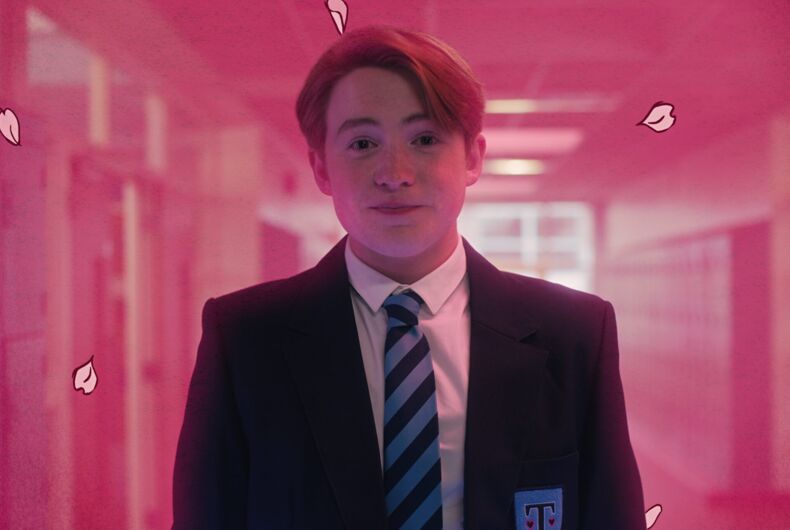 Heartstopper star Kit Connor was forced to come out as bisexual following a barrage of queerbaiting allegations from supposed fans of the show. Connor, who plays the bisexual character Nick Nelson in the Netflix series, came out on Twitter after being harassed on social media for not publicly disclosing his sexual orientation. “Back for a minute. I’m bi,” Connor tweeted on October 31. “Congrats for forcing an 18-year-old to out himself. I think some of you missed the point of the show. Bye.”

For months, many fans had been speculating about the actor’s sexual orientation since Heartstopper first dropped in April, accusing him of being intentionally vague about his identity to queerbait. Before he came out, Connor had said he didn’t feel the need to label his sexuality right away, saying that it made him feel uncomfortable that so many people were trying to pressure him and his co-star, Joe Locke, both of whom are teenagers, into publicly coming out “when maybe we’re not ready.” After being spotted holding hands with actress Maia Reficco in September, however, this scrutiny only intensified.

Using the hashtag #kitconnorgoawayfromheartstopper, these so-called fans jumped to conclusions. They took to Twitter to berate him for supposedly ruining the show, accusing him of apparently profiting off of LGBTQ people by playing a queer character despite appearing to be straight. This prompted Connor to abandon the platform for nearly a month before ultimately feeling forced to reactivate his account and come out as bi.

Not only does this type of harassment completely miss the whole point of the series, which is that everyone deserves to be able to come out on their own terms, but it also demonstrates just how toxic and misguided the internet’s obsession with queerbaiting is and just how out of control the discourse around queerbaiting has become.

Queerbaiting is not a term that is even applicable to real people. Essentially, queerbaiting is a marketing device that appeals to a queer audience by hinting that certain characters in books, movies, or TV shows might be queer without anything ever coming of it. It is “the practice of implying non-heterosexual relationships or attraction (in a TV show, for example) to engage or attract an LGBTQ audience or otherwise generate interest without ever actually depicting such relationships or sexual interactions.”

One of the most blatant examples of queerbaiting occurs in the police procedural Rizzoli & Isles, in which the show’s two main characters, Jane Rizzoli and Maura Isles, have a pretty sapphic chemistry despite only being portrayed as friends. The actors and creators of the show even admitted to purposefully playing up the lesbian subtext between the two to attract a more queer audience. Another glaring example of queerbaiting occurs in the BBC series Sherlock, in which Sherlock Holmes and John Watson’s romantically ambiguous relationship inspired many viewers to write their own explicitly gay fanfic to fill in the gaps the show failed to address.

In more recent years, however, some have chosen to co-opt the term and use it to pressure celebrities and actors to publicly reveal their sexual identities for either embracing certain aesthetics and behaviors associated with queerness or for simply refusing to label themselves. Harry Styles has often been at the forefront of this discussion due to his fashion choices and penchant for playing coy whenever the topic of his sexuality comes up.

Accusations of queerbaiting have also sparked an ongoing debate about whether or not straight actors should be allowed to play queer roles, which has proved to be a rather difficult conversation to maneuver, considering such a hard and fast rule would force closeted actors to either come out prematurely or miss out on an opportunity to play a character they can relate to without feeling pressure to publicly declare their sexual orientation.

While queerbaiting has always been an accusatory term, it is intended to call out how characters are portrayed in media, not to force people to out themselves because the internet feels entitled to know whether or not someone is queer. As a result, there is no such thing as queerbaiting in real life — and for a good reason. Real people deserve to be able to decide when, where, and how they come out without being accused of queerbaiting if they don’t do it fast enough. Coming to terms with one’s sexual orientation can take some time, especially for young people, like Connor, and pressuring someone to come out before they’re ready is incredibly harmful and regressive. It’s also pretty biphobic, in Connor’s case, at least. Last time I checked, bi guys can date girls and still be queer.

No one should feel forced to come out or perform their queerness for others to be valid. Coming out should be a liberating and empowering experience. It should not be used to bludgeon people into proving they’re not straight. The internet’s frenzied obsession with verifying people’s queerness through unfounded accusations of queerbaiting is more than just a desire for LGBTQ visibility and representation. It’s a performatively righteous and moralistic witchhunt now being used to gatekeep queerness and actively harm people who are still figuring things out.

As a community and a society, our first instinct should be to protect people who aren’t out yet, not to pressure them into outing themselves before they’re ready. Heartstopper has shown viewers that coming out is a personal journey everyone deserves to experience on their terms and in their own time. Connor should have been afforded that same opportunity, as should we all.