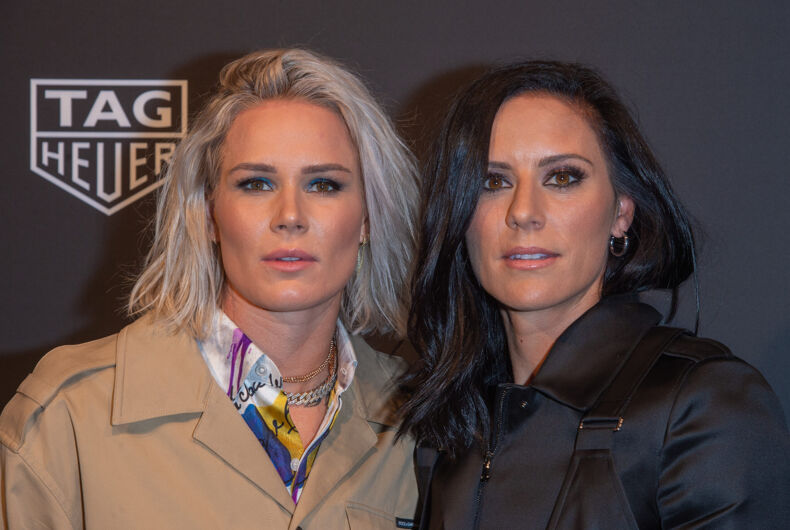 Ashlyn Harris and Ali Krieger don’t want to be remembered for their trophies.

The wife-and-wife soccer stars may have many of them, but it is far more important to the two-time World Cup champions that they are known for being kind.

“I want people to know that we’re more than just footballers,” Krieger told LGBTQ Nation. “That’s what we do; it’s not who we are…We want to create a better life and a better world where people are happy and peaceful and kind and generous. That’s how we live every single day.”

“I always want to be remembered by the way I treated people and made them feel,” added Harris, who just announced her retirement after 13 years as a professional soccer player. “I don’t want to be known for the World Cups and for the accolades that just sit on a shelf and collect dust…I just want to be kind.”

The couple spoke with LGBTQ Nation only a few months after adopting their second child, Ocean. Now 3.5 months old, Ocean and his 20-month-old big sister Sloane have brought Harris and Krieger a life filled with, as Harris described it, “beautiful chaos.”

And the couple has chosen to share that beauty with their fans, posting regularly to social media about the joys of family life. It was intentional, they said, to make their family as visible as possible to help normalize LGBTQ love and parenting.

“If you can see it, you can be it,” Krieger said. “We didn’t have what we have now when we were young.”

Visibility, Harris added, is “our fueling factor every single day.”

“We want people to see themselves in our family and know that it’s loved and it’s accepted and we all have a place…When I was a child it was a confusing time. I just didn’t see people like me, and I didn’t see families like mine, and we want to change that.”

“[We want people to] see themselves in our queer, biracial family, and we don’t take that lightly. When we get the chance to continue to break barriers and show up for our community, we do so in the utmost manner of respect.”

Despite their busy home lives and their commitment to the game, the couple has managed to cultivate an off-the-field career in activism. They’ve become known for speaking out for the rights of trans youth, advocating for mental health care, and for being part of the US Women’s National Team’s historic – and successful – battle for equal pay.

Every cause and brand they publicly support is also extremely deliberate.

Krieger said the brands they partner with are “a representation of us. We don’t just fly off the handle and do whatever. As much as we’re representing brands, it’s also the opposite.”

At the moment, they have aligned themselves with the Women’s Dual Action supplement from Align Probiotic, the motivation behind their latest tour with the press.

“I really struggle with mood balance and mood swings, especially during my menstrual cycles,” Harris said. “It really is debilitating sometimes. If I can take something that helps balance and neutralize that…I need to show up not only for myself and take care of my own personal journey of health, but I also need to show up and be the best version of myself for my wife, for my family, for my teammates.”

It is Ocean and Sloane, the couple said, who continue to inspire the causes they champion.

“We gotta make sure that we provide a better life for our children, and it’s up to us,” Harris said. “Action is very important to us. I can say all the things in the world I want, but we have to take actionable steps every day to make this place better so our children have a chance.”

Giving children a chance also means supporting trans youth, which the couple fiercely does. As LGBTQ athletes, they have made sure to continue speaking out for the rights of trans youth to participate in sports.

She again emphasized one of the couple’s favorite sayings, “If you can see it you can be it.”

“I’m so happy we have trans athletes who are out and proud in our community and even in our league, so that younger trans youth can see that they can accomplish their goals and dreams just as well.”

The internet’s obsession with queerbaiting has gone too far