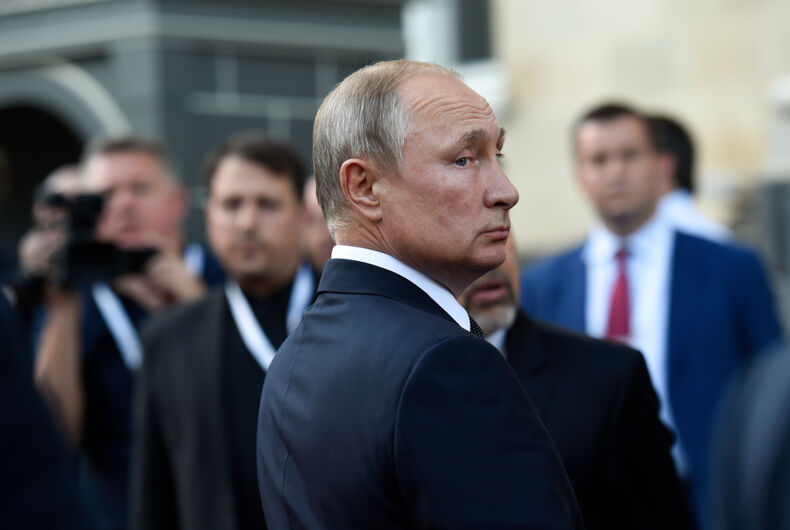 The newly signed law effectively outlaws any public expression of LGBTQ+ life in Russia by banning “any action or the spreading of any information that is considered an attempt to promote homosexuality in public, online, or in films, books or advertising,” Reuters reported.

Putin signed the law as part of a broader push for Russians to embrace the nation’s “traditional values.” The push has been used as a justification for Russia’s invasion of Ukraine and Russia’s stance against the western multinational defense coalition NATO which seeks to limit Russia’s military expansion in Europe.

“[Western countries] spit on the natural right of billions of people, most of humanity, to freedom and justice, to determine their own future on their own. Now they have completely moved to a radical denial of moral norms, religion, and family,” Putin said in an October speech.

Putin first signed a law banning so-called “gay propaganda” in Russia in June 2013. The law ostensibly sought to “protect children” from any “propaganda of nontraditional sexual relationships,” as stated in the law’s text. The new law extends the restrictions to not just children but Russians of all ages.

The law has mostly been used to silence LGBTQ+ activist organizations, events, websites, and media, as well as to break up families and harass teachers. It has also been roundly condemned by the United Nations Committee on the Rights of the Child, the human rights groups Amnesty International and Human Rights Watch, as well as civil rights activists around the world.

These critics say the updated law will further endanger the lives of Russia’s LGBTQ+ population, which has already suffered increased harassment, violence, and hostility in recent years.

Anti-LGBTQ+ religious leaders and right-wing political figures in the U.S. have praised Putin for his law. Indeed, Republican legislators, so-called “parents’ rights groups,” and right-wing pundits have increasingly moved to ban kids from accessing any LGBTQ+ content, gender-affirming healthcare, or drag shows over misleading claims that these “sexualize” and “groom” children.

In 2013, Catholic Family and Human Rights Institute (C-FAM) President Austin Ruse said Russia’s anti-LGBTQ+ laws were a “good thing” that “most of the people in the United States” would support. In 2014, anti-LGBTQ+ evangelical leader Franklin Graham also defended the law.

Bannon and his podcast guest, private military contractor Erik Prince, discussed how Russian people “still know which bathroom to use” and that there are only two genders. They praised Russia for not flying Pride flags and complimented that “they don’t have boys swimming in girls’ college swim meets,” an apparent reference to trans female swimming champion Lia Thomas.

Republican legislators have signaled that, once they retake the U.S. House in January, they will stop providing funding and military support to Ukraine’s defense against Russia’s ongoing invasion. Putin’s soldiers have reportedly been attacking and torturing civilians, focusing especially cruel treatment upon LGBTQ+ Ukrainians. Queer Ukrainians fear that Russia will instate anti-LGBTQ+ laws and allow cruel anti-gay crackdowns if the country overtakes its land.