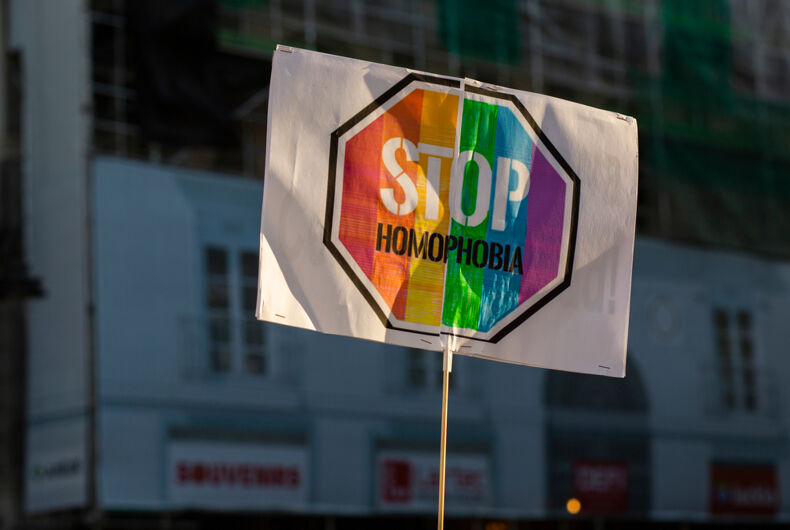 A Richmond, Virginia restaurant refused to serve a group from the anti-LGBTQ+ Family Foundation, citing the restaurant’s desire to protect its LGBTQ+ and women staff.

“Metzger Bar and Butchery has always prided itself on being an inclusive environment for people to dine in,” the restaurant wrote in an Instagram post.

“In eight years of service we have very rarely refused service to anyone who wished to dine with us. Recently we refused service to a group that had booked an event with us after the owners of Metzger found out it was a group of donors to a political organization that seeks to deprive women and LGBTQ+ persons of their basic human rights in Virginia.”

“We have always refused service to anyone for making our staff uncomfortable or unsafe, and this was the driving force behind our decision. Many of our staff are women and/or members of the LGBTQ+ community. All of our staff are people with rights who deserve dignity and a safe work environment. We respect our staff’s established rights as humans and strive to create a work environment where they can do their jobs with dignity, comfort and safety.”

A post shared by Metzger Bar And Butchery (@metzgerrva)

In a blog post on the organization’s website, Family Foundation President Victoria Cobb compared the situation to Black people being refused service due to their race during the 1950s and 1960s, stating, “Thankfully, in 1960, 34 brave Virginia Union University students held a peaceful lunch counter sit-in at Thalhimers Department store in Richmond to demand service at a whites-only counter. They were convicted of trespassing but, after a tremendous legal battle, were vindicated by the U.S. Supreme Court.”

“Welcome to the double standard of the left,” Cobb continued, “where some believe Jack Phillips must be forced to create a wedding cake as part of the celebration of a same-sex ceremony but any business should be able to deny basic goods and services to those who hold biblical values around marriage.”

Cobb was referring to a Colorado Supreme Court case in which Masterpiece Cakeshop owner Jack Phillips was sued after he refused to sell a cake to a same-sex couple because they were going to serve it at their wedding. In that case, the Supreme Court gave him a very narrow victory on procedural grounds without dealing with the question of whether Christians have to follow the law if doing so would require them to treat LGBTQ+ people as equal.

Now, another Colorado case, 303 Creative LLC v. Elenis, has come before the Supreme Court in which an owner of a web design business sued the state preemptively to get a religious exemption to the state’s anti-discrimination law because she doesn’t want to make websites for same-sex couples’ weddings.

In an interview with Virginia Business, Cobb decried the Family Foundation’s own experience with a website design company that refused to design the organization’s website due to their political beliefs, as well as other businesses who have refused to work with them.

Unlike Colorado, Virginia’s anti-discrimination law does not protect people based on political beliefs, according to Raw Story, which also pointed out that the Family Foundation is faith-based but not affiliated with a specific religion.

Cobb’s post also included a dig at same-sex marriage and lambasted the Senate’s passage of the Respect For Marriage Act, which would require states and the federal government to recognize same-sex marriages performed in other states should the Supreme Court overturn its 2015 ruling declaring marriage equality the law of the land.

“Not even 24 hours before our event was canceled, the U.S. Senate passed the ‘(Dis)Respect for Marriage Act’ with the help of 12 Republicans who assured us that, even with this federal codification of same-sex marriage, the language in the act asserting that beliefs on marriage between a man and a woman are ‘based on decent and honorable religious or philosophical premises’ and those that hold such beliefs ‘are due proper respect’ would preserve, not diminish, religious liberty. It took less than a day for us to see how worthless that empty rhetoric is.”

The incident has sparked a debate about whether refusing service to any type of group should be acceptable.

Eighty-two-year-old Elizabeth Johnson Rice, who was a member of the famed Richmond 34 lunch counter protestors who Cobb referred to in the blog post, spoke with Virginia Business about the comparison.

Rice said the situations were not the same and that she believes in marriage equality but still felt the group should not have been refused service at the restaurant.

“We were going for equal justice for all,” Rice said. “We were trespassing because we didn’t get service… if we wanted to eat anything [from Thalhimers’], we had to go into the alley and knock on the little door. That was really Jim Crow.”

Nevertheless, she said the Family Foundation was not treated fairly and that “their reservation should be honored in 2022.”