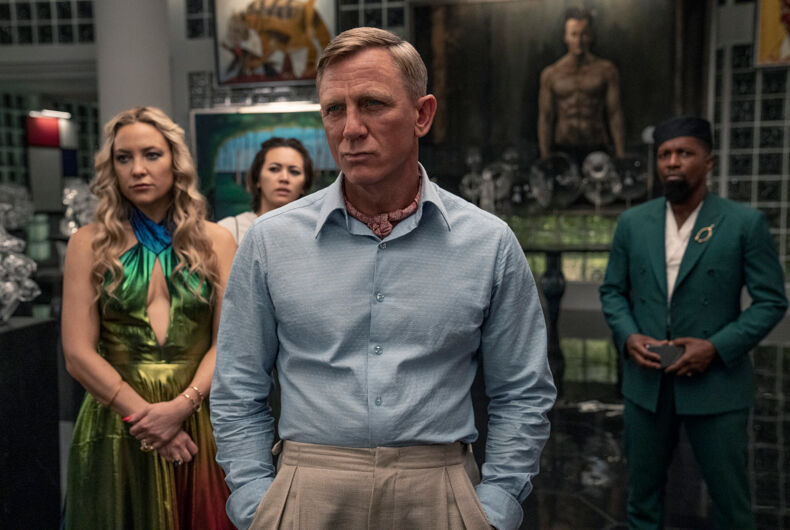 Both Daniel Craig and director Rian Johnson have already confirmed that Craig’s character, detective Benoit Blanc, is queer. But they’ve kept tight-lipped about the actor who plays Blanc’s partner in the new Knives Out sequel Glass Onion ahead of the film’s December 23 release on Netflix.

But following Glass Onion’s one-week theatrical release last month, word has gotten around about which dreamy leading man plays Craig’s character’s live-in paramour. And while it doesn’t seem like the actor’s cameo has much of anything to do with the film’s central whodunnit, be advised, a mild spoiler is ahead.

Following the 2019 release of Knives Out, there was speculation as to whether Craig’s ascot-wearing detective might be gay. During a press conference at the London Film Festival back in October, Johnson was asked directly whether Craig’s character is in fact queer.

“Yes, he obviously is,” the director said, according to Entertainment Weekly.

“There’s nobody in the world I can imagine in bringing me more joy for Benoit Blanc to be with,” Johnson said of the actor who reportedly appears briefly in the film as the detective’s apparent lover.

“No spoilers,” Craig added, “[but] who wouldn’t want to live with that person?”

Then, in a story published by Deadline late last month, Craig had this to say about his character’s sexuality: “The less of a song and dance we make about that, the better, really, for me, because it just made sense. And also, as I said at the LFF, who wouldn’t want to live with the human being that he happens to live with? It’s nice, it’s fun. And why shouldn’t it be? I don’t want people to get politically hung up on anything.”

Now, The Advocate reports that Blanc’s live-in partner is played by none other than Hugh Grant. IMDB, meanwhile, lists Grant’s character’s name as “Phillip.”

Of course, this is hardly the first time either Craig or Grant have played gay. Grant’s very first leading role came in 1987 when he played closeted aristocrat Clive Durham in out director James Ivory’s Maurice. Three decades later, he scored an Emmy nomination for his role as disgraced British politician Jeremy Thorpe in Prime Video’s miniseries A Very English Scandal.

Likewise, one of Craig’s early leading roles was in 1998’s Love Is the Devil: Study for a Portrait of Francis Bacon, in which he played the out artist’s rough trade lover, George Dyer. The actor, who made headlines for saying he prefers to go to gay bars to avoid fights, also injected some homoeroticism into the role of James Bond during his five-film run as the iconic spy.