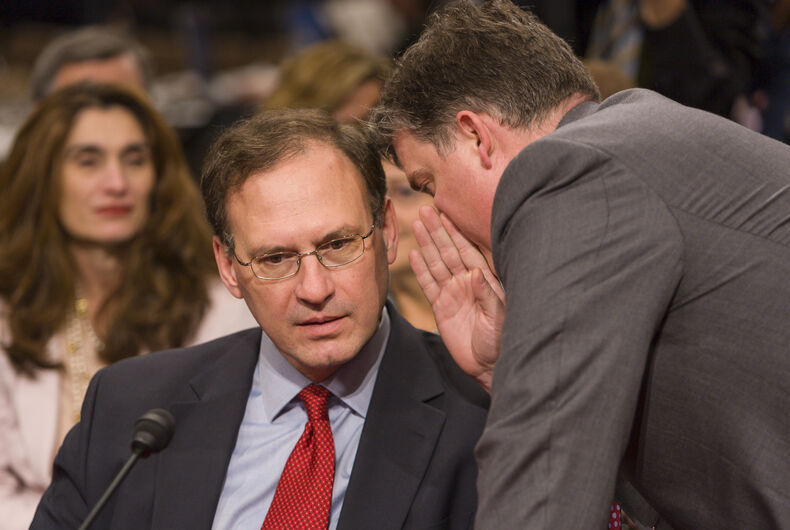 Yesterday, oral arguments took place in 303 Creative LLC v. Elenis, the Supreme Court case about the web designer who doesn’t want to make websites for same-sex couples. And many commentators are calling out Justice Samuel Alito for joking about the KKK during the arguments.

In the case, web designer Lori Smith of Denver sued the state of Colorado because she is worried that the state’s anti-discrimination law would force her to make websites announcing same-sex couples’ weddings. Her complaint, which cites the Bible as well as caselaw, says that she “believes that God is calling her to promote and celebrate His design for marriage… between one man and one woman only.”

She hasn’t made any websites for anyone’s weddings so far and two lower courts have dismissed her suit because she hasn’t actually faced any consequences under the Colorado law.

During oral arguments yesterday, Justice Ketanji Brown Jackson offered a hypothetical scenario about a business in a mall offering old-timey pictures with Santa in sepia tones. She asked Kristen Waggoner of Alliance Defending Freedom – the anti-LGBTQ+ hate group arguing in favor of Smith’s right to refuse LGBTQ+ clients – if the business could refuse to allow Black people to get a picture with Santa because the business is “trying to capture the feelings of a certain era,” an era where racial segregation was legal.

Jackson’s point was that if a web designer refuses to make websites for LGBTQ+ people on the grounds that making a website is a form of expression protected by the First Amendment, then the same argument should hold for a racist mall photographer.

And Waggoner pretty much agreed; if she got her way, racist photographers could refuse Black clients.

“This court has protected vile, awful, reprehensible, violent speech in the past,” she said.

“So if there’s a Black Santa at the other end of the mall, and he doesn’t want to have his picture taken with a child who is dressed up in a Ku Klux Klan outfit, now does that Black Santa have to do that?” Alito asked, apparently not knowing that Colorado’s law protects people from racist and homophobic discrimination but not sartorial discrimination.

“And presumably, that would be the same Ku Klux Klan outfit regardless whether if the child was Black or white or any other characteristic,” Justice Elena Kagan interjected, reminding her colleague of the difference between clothes and skin color under the law.

“You do see a lot of Black children in Ku Klux Klan outfits, right? All the time,” he snapped back sarcastically. Some people in the gallery laughed.

He has faced criticism online for his joke.

“The joke about Black kids in KuKluxKlan outfits? No Justice Alito, these ‘jokes’ are so inappropriate, no matter how many in the courtroom chuckle mindlessly,” said Sherrilyn Ifill, former president of the NAACP Legal Defense Fund and current senior fellow at the Ford Foundation.

This argument….follow @mjs_DC and @chrisgeidner for a live tweet. I’m listening but this is really upsetting. The joke about Black kids in KuKluxKlan outfits? No Justice Alito, these “jokes” are so inappropriate, no matter how many in the courtroom chuckle mindlessly.

Oral arg in #303Creative: Justice Alito is resorting to KKK jokes. Ha ha ha. As if what's at stake here is funny, and isn't taking place in a context in which LGBTQ people feel like we have a target on our backs. And, ahem – Klan jokes aren't funny under any context.

And no, the joke isn't funny, either.

This would be a horrific statement from anyone, but it is especially egregious from a Supreme Court justice.

Alito lied before the Senate, leaks Supreme Court business, and acts in concert with the Federalist Society.

He didn't "joke with" Kagan. He made a seriously flawed legal analogy that, for a Supreme Court justice, was surprisingly uninformed about the nature of protected classes. Kagan pointed out his complete misunderstanding of the legal concept. Then he made some bizarre redirect.

This racist is a disgrace to the bench. I can only imagine what he says when he's with his other racist elitist friends.

Does Justice Alito intend to be taken seriously?
He is demeaning & degrading the SCOTUS by these ridiculous juvenile word games. More proof that they are not to be viewed with respect.

NO BUSINESS ON THE BENCH. Put him in a church and away from me

And yet he remains on the Court that we are supposed to trust to be objective.

This is the casual racism that permeates America. This is also representative of racists that have no idea that they are racists. As an old white guy, I hear these types of remarks from many who think this is funny and not at all wrong.

He is a terrible human and an embarrassment to the court.