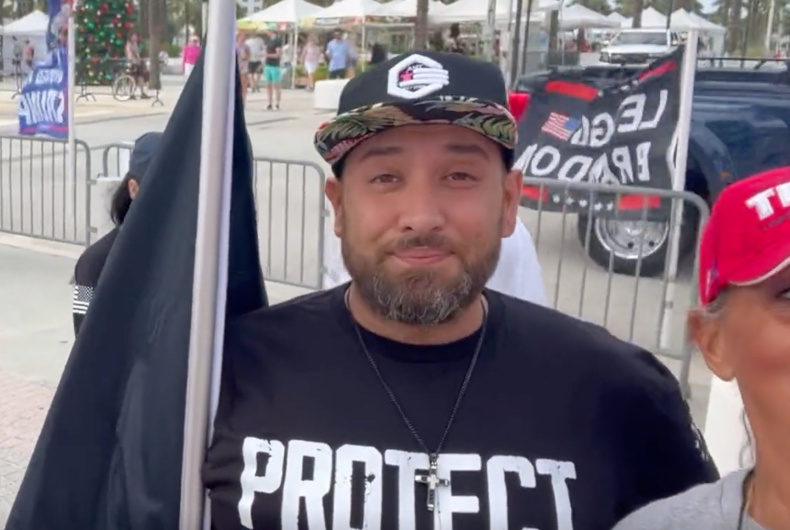 A far-right anti-LGBTQ+ rally and photo-op brought out several dozen attendees including Proud Boys and passersby on the beach in Ft. Lauderdale Saturday to rally against “child grooming” and “radicalized sexual curriculum.”

The event was organized by a coalition of anti-LGBTQ+ advocacy groups and featured speakers from Moms for Liberty, Florida Fathers for Freedom, and the newest addition to the online anti-LGBTQ+ biosphere, Gays Against Groomers. A representative for that group was among Fox News host Tucker Carlson’s guests on his first show following the Club Q massacre in Colorado Springs.

“Desantis’ dangerous anti-LGBTQ politics and rhetoric have created an anti-LGBTQ hysteria we haven’t seen since the days of Anita Bryant and her ‘Save Our Children’ campaign,” posted Equality Florida Senior Political Director Joe Saunders to Twitter.

The counter-demonstration across the street from the beachside rally invited the attention of Gays Against Groomers founder Conservative Ant, who was recorded by co-founder Jordan Toste confronting the counter protesters and mocking them.

So the opposition at our Protect the Children rally in Florida are having a normal one 🤪 pic.twitter.com/eMbXkKWsEZ

“You just came over here with Proud Boys! You’re a Nazi!,” shouted one counter-demonstrator at the gay conservative.

“You’re anti-gay! You’re anti-gay, you’re pro-grooming!” he shouted back, laughing, as a scrum of photographers recorded the scene and police officers stood by.

“We’re not getting anywhere with these people,” said Toste as the pair dismissed the counter protesters and retreated to their side of the street. The encounter was promptly uploaded to the group’s Twitter account and shared among the event’s organizers and their followers.

Toste, who is gay, was a featured speaker at the anti-LGBTQ+ rally.

Jordan Toste of @againstgrmrs gives a heartfelt speech at the #ProtectTheChildren rally expressing his concern that children are being "bamboozled" into hating and alienating their parents pic.twitter.com/LilvVVqkYK

Conservative Ant also engaged with “anti-grooming” ally Chris Nelson, to talk about how “groomers” were giving “gays a bad name.” The interview took place in front of a large pro-Trump flag and one declaring “Let’s Go Brandon.” Conservative Ant’s attire, all black with insignia and a t-shirt reading “Protect the Children”, was reminiscent of Proud Boys’ and other hate groups’ militia-wear.

“We’re an organization that protects kids from brainwashing in elementary schools and at young ages,” Conservative Ant told Nelson, “against teaching the puberty blockers, and making sure we protect the innocence of children, and not forcing them to do things like elective surgeries and stuff like that to change their gender.”

“I was coming back from my honeymoon, actually,” said Nelson, “and I thought to myself, ‘There should be a group of gay people standing up to this LGBTQIA plus plus plus, uh, indoctrination and also the gender changing hormones, and butchering children and stuff like that.’ And then all of a sudden I see Gays Against Groomers, and I’m like, ‘Sweet.'”