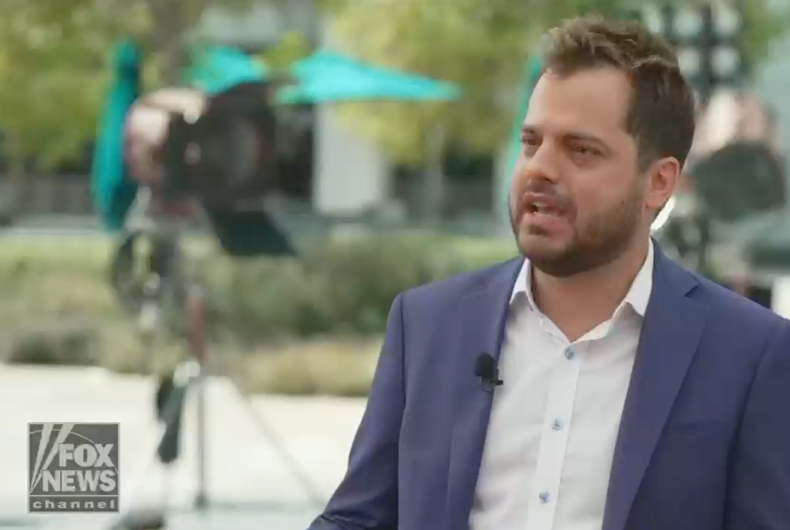 Fox News anchor Tucker Carlson is well known for his virulent homophobia — he’s used attacks on the LGBTQ community to stoke hatred and ratings for years. His first show following the Club Q shooting in Colorado Springs featured the founder of Gays Against Groomers.

Less well-known is the man behind Carlson and the rest of the right-wing host’s Fox propaganda machine: Justin Wells, senior executive producer of Tucker Carlson Tonight, Vice President of Tucker Carlson Digital Products, and an out gay man.

Wells has been with Carlson as his executive producer since the beginning of the buttoned-down host’s rise at Fox, when Tucker Carlson Tonight debuted in 2018. It’s now the most-watched show on the network and often on all of cable TV.

The show got there in large part based on Carlson and Wells’ red-meat obsession with sexuality and gender, from opposition to marriage equality to opposition to gender-affirming care for minors. A graphic for that first show following Club Q screamed, “Stop Sexualizing Kids,” with kids spelled out in a kindergarten font.

Journalist Michelangelo Signorile recently interviewed some of Well’s current and former associates, revealing a synergistic relationship between the gay executive producer and his talent: “They are two peas in a pod. Simpatico,” said one industry vet who knows Wells. “It’s a very clear manifestation of someone who showed their true colors.”

Wells grew up in Florida and worked at local TV stations in Tampa, West Palm Beach, and Miami, where former colleagues would see him often at gay clubs in South Beach, and at gay journalist association events. In 2008, he started at Fox as a field producer for Greta Van Susteren, working his way up the ranks. One former Fox producer who knew Wells and his then-boyfriend at the time described a “quiet dude, unassuming.”

“If you would have told me in 2008 that Justin would be the executive producer of the number one right-wing TV show in America, I would have said you’re out of your mind.”

Another associate of Wells at Fox added: “I don’t know if he’s just completely blinded by the money. It’s mind-boggling.”

Wells is married, and he and his husband share a home in New York City and a country house.

The preppy and sockless Carlson’s obsession with gay stuff, and his sometimes violent response to it, is well documented. In 2007 he admitted on MSNBC to smashing a man’s head into a bathroom stall after he “bothered” him in public restroom. In 1991, at the height of the AIDS epidemic, he penned tributes in his Trinity College yearbook to Dan White, who assassinated San Francisco supervisor Harvey Milk, and infamous homophobe Senator Jesse Helms of North Carolina.

In an interview on Fox with Carlson and Wells for the launch of their Tucker Carlson Originals documentary series, Wells left no doubt about the pair’s synergy. Of Fox execs he said: “They believe in what we’re doing, and have since we launched ‘Tucker Carlson Tonight.’”

Did Disney intentionally botch the marketing strategy for its new film with a gay lead?