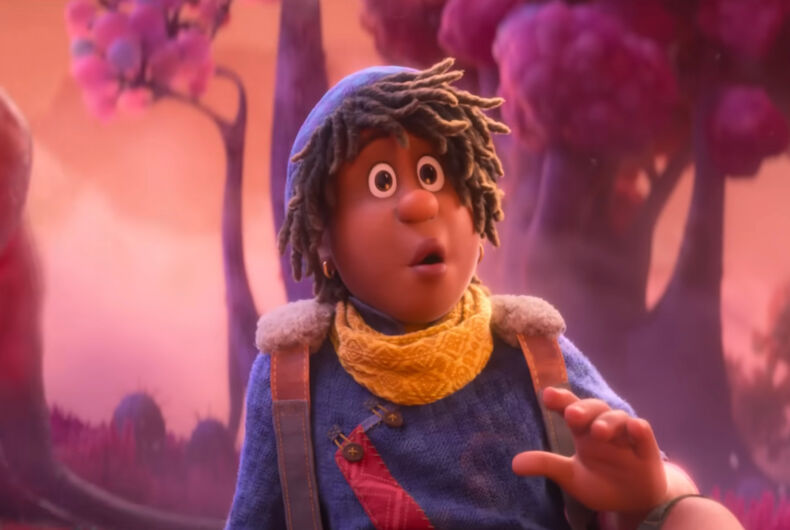 Perhaps the biggest story to come out of what was by all accounts a disastrous Thanksgiving Weekend at the box office was the failure of Disney Animation’s Strange World.

To recap: The family sci-fi adventure film premiered on what is traditionally a stellar weekend for Disney’s animated fare. But according to Variety, Strange World brought in just $18.6 million over the five-day holiday weekend. Given its reported $180 million production cost, plus marketing costs, the film is projected to lose around $100 million.

Notably, Strange World is the first Disney animated film to feature a gay lead character. Out comedian and actor Jaboukie Young-White voices out teen Ethan, the youngest member of the film’s family of adventurers. Ahead of its release, right-wing commentator Ben Shapiro railed against Disney’s supposed “gay agenda” on Twitter, while anti-LGBTQ groups like One Million Moms demanded one of their typical boycotts.

Right-wing outlets like The National Review have been quick to note the film’s inclusion of an openly gay character in their coverage of its failure at the box office, while some film critics and fans have fretted that Disney would blame the flop on the character.

Disney is 100% going to blame STRANGE WORLD's inevitable bad box office on the fact that there's an openly gay character in the movie when in reality, it's going to flop because they didn't market it at all. They'll use this as an excuse to not have queer rep ever again. pic.twitter.com/diD7It4Bk4

Calling it now that #StrangeWorld vastly underperforms and the blame falls on queer representation and not the near total lack of marketing. Disney didn’t even try to help this one. pic.twitter.com/4RwNlgBCfk

Disney sabotaged Strange World just like they did Treasure Planet. Release a summer movie in the winter, sandwich it between two much bigger movies, barely market it, and use its box office failure as an excuse to not do hand-drawn animation- I mean diversity anymore.

But did Strange World really flop because it featured a gay lead? No doubt some conservative and anti-LGBTQ parents refused to take their kids to see the film, which received mostly positive reviews. But industry coverage of its disappointing box office returns tells a different story.

First of all, as pretty much all of the trade publications have reported, this was a particularly bad Thanksgiving weekend for movie theaters. As AV Club notes, “over the three-day weekend, general box-office numbers only hit $95 million—an abysmal plummet from the same weekend’s 2019 and 2018 numbers ($181 million and $216 million, respectively).”

Disney also seems to have fumbled the film’s promotion. Despite speculation about the film’s marketing costs, as Vulture points out, there were no Happy Meal toys, no pop song from the film’s soundtrack to gin up enthusiasm, and few if any subway ads. According to Screen Rant, much of the marketing didn’t even take place until shortly before the film’s release, while Slash Film and others have noted that Disney failed to convey what Strange World was actually about.

Many fans on Twitter have questioned whether those missteps were intentional.

There is no way that Disney – one of the biggest companies on earth, with all the marketing resources at their disposal – forgot to market #StrangeWorld, a film with a prominent gay character.

They knew exactly what they were doing.

It really shows Disney's true colors that they would do everything in their power to promote cash grab remakes of their old movies but not promote Strange World until a week before release and then claim "Oh we tried to make a gay movie but nobody watched it. :( " pic.twitter.com/R93fFIY7OD

I’ve been to the movie theater over 100 times this year and I didn’t see a single trailer for Strange World.

They do it on purpose. They intentionally bury it so they can say “See? Nobody wants to see movies like this.” Maybe they would if the studio promoted it. https://t.co/Res3q68PE3

Love how anyone with half a brain cell can put together that Strange World bombed at the box office cause Disney barely marketed it, and yet there's still morons out there who think it bombed solely cause it's "woke". Never ceases to amaze me how willfully stupid homophobes are

Disney is known for this dirty trick of barely/poorly marketing a movie that to "prove" that certain movies movies don't make money.

They did it to Treasure Planet when moving away from 2D animation, and now to Strange World to prove the gays aren't a good financial investment. https://t.co/8CMOX27MmI

Meanwhile, Disney is on a bit of a losing streak with its animated films. Pixar’s Lightyear had a disappointing opening weekend in June, and as Variety notes, Encanto didn’t really pick up steam until it arrived on Disney+.

Streaming is also almost certainly a factor here. With more and more movies going straight to streaming platforms, or else doing so within weeks of their theatrical releases, audiences are increasingly likely to wait until they can see a movie on a service they’re already paying for rather than paying the additional price of a ticket. In Disney’s case, films like Pixar’s Turning Red, Luca, and Soul went straight to Disney+, and according to Variety, some analysts think the studio has conditioned families to watch new movies at home.

“What we can say is that there’s a real risk here that during the pandemic, families got socialized to expect high quality, first run animated movies on streaming, and that has not really changed yet,” Matthew Belloni, host of The Ringer podcast The Town, said on a recent episode.

Strange World, meanwhile, is reportedly expected to hit Disney+ by Christmas. It’s possible a straight-to-streaming strategy would have served the film – if not Disney’s bottom line – better, but as Deadline’s Anthony D’Alessandro speculates, that could have been a PR disaster for Disney following former CEO Bob Chapek’s bungling of the company’s response to Florida’s Don’t Say Gay bill.

“A strict Disney+ release for Strange World would indicate that the Burbank, CA studio is giving a lesser release and a lesser profile for a big movie with a gay character versus a global theatrical launch,” D’Alessandro writes.

Broadly speaking, as many industry watchers have been saying for years now, audiences are simply less likely to go to the movies now. This trend, far less than homophobia, is likely one of the biggest factors in the box office failures of films like Bros and Strang World. As The Ringer’s Amanda Dobbins put it on The Big Picture podcast, “The audience just isn’t at theaters anymore, and it hasn’t been for some time.”