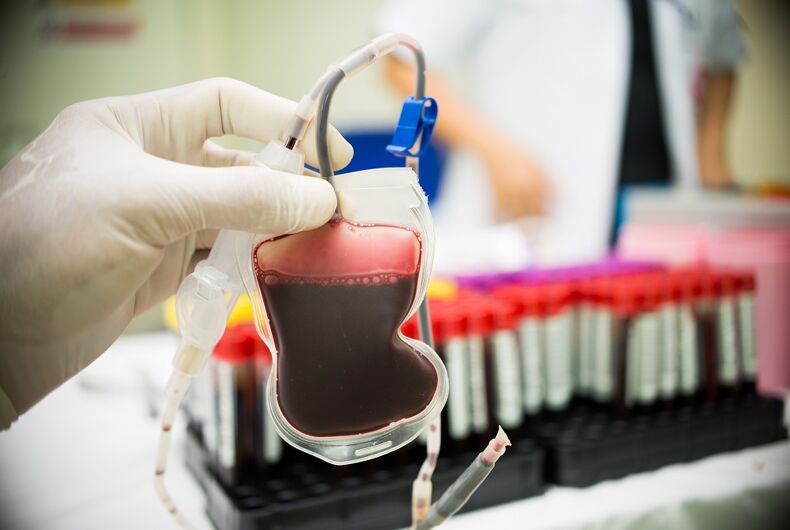 The Food and Drug Administration (FDA) could soon loosen restrictions on blood donations from gay and bisexual men.

Until 2015, men who had sex with men were banned from donating blood at all, a policy that began during the AIDS epidemic of the 1980s. In 2015, the FDA lifted the total ban but said gay and bisexual men could only donate blood if they had not had sex for a full year. That time frame was shortened to three months amid blood shortages during the pandemic.

Now, new FDA guidelines are reportedly in the works that would allow gay and bisexual men in monogamous relationships to donate blood without abstaining from sex.

The decision was made based on a study to determine the effectiveness of individualized risk assessments, the Wall Street Journal reported.

Gay and bisexual men who do seek to donate under the new policy will join all potential blood donors in being asked to complete a risk assessment form that assesses for certain sexual behavior.

For decades, LGBTQ activists have fought against restrictions barring men who have sex with men from donating blood, arguing that the bans stem from discrimination and stigma rather than increased risk.

“The whole reason is because they think men who sleep with men are at a higher risk of getting HIV,” former blood technician Alistaire Nzekio told the American Journal of Managed Care in 2020.

“Whether or not you donate blood, that blood is tested and verified and checked before it’s even passed on. Just because I’m a gay man sleeping with another m[a]n does not make my blood any less clean. I think it stems from the 1980s, when the virus first came out, when people didn’t really understand it. You’re just as likely to get HIV whether you’re straight or gay.”

The Human Rights Campaign (HRC) explained that because tests cannot be 100% accurate, the FDA has taken the approach of banning what it has deemed higher-risk populations. But HRC says the policy as it currently stands is discriminatory and “does not treat persons with like risks in a similar way.”

“For example, a man who has had protected oral sex with another man once in the 3 months [is] currently barred from donating blood. Yet a woman who has had unprotected sex with multiple partners over the same time frame with no knowledge of their personal histories remains in the donor pool.”

The new rules would, of course, change that.

The Wall Street Journal said the FDA will likely issue the new rules in the next few months.

Did Disney intentionally botch the marketing strategy for its new film with a gay lead?