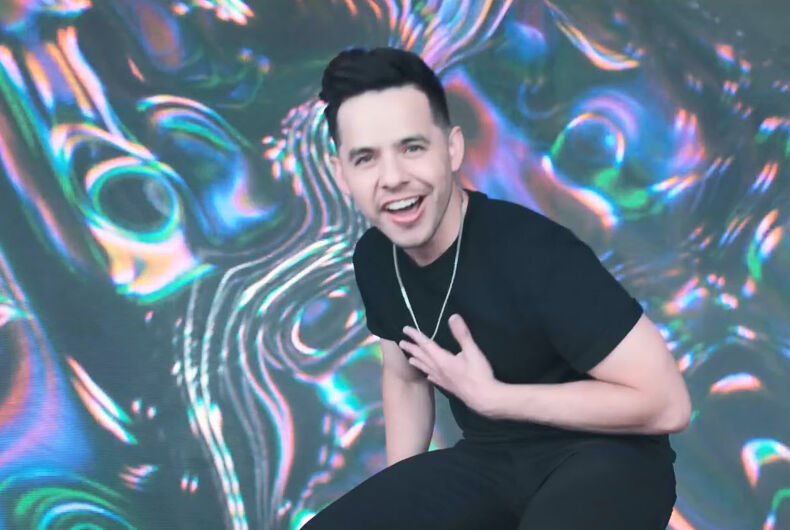 Singer-songwriter and former American Idol contestant David Archuleta revealed during a holiday concert that he struggled with religion, unsuccessfully tried to marry women three times, and even contemplated suicide while coming to terms with his identity.

Archuleta publicly wept on stage on December 23, during the final show of his “The More the Merrier Christmas Tour” in Chandler, Arizona. He said he contemplated not performing his song “My Little Prayer” during his concert because, “I don’t know if I can really get into the Christmas spirit this year.”

However, he said his manager encouraged him to perform the song, saying, “I think you should do it because it’s still a part of your story, and what’s led you to where you are now and who you are today.”

Archuleta then said that around age 12, he began praying a lot to God for many years “because I was afraid of who I was and how I was, and I thought I needed to be able to change that in order to be acceptable and to be okay.” He was raised in the Mormon faith.

“I spent a lot of time praying,” he continued, “and years went by and I just thought, ‘Well, maybe, maybe God doesn’t like me because you know, or maybe I’m just not good enough. I don’t have enough faith because I’m not changing.’ And I thought, ‘Well, maybe I just need to put more effort into it.'”

He then said that he had purchased at least three different engagement rings to propose to different women, but the women would say things like, “You know, you’re so cold? You’re so distant… I’m used to feeling loved, and I don’t feel that from you.”

The comment bothered him because he felt he was doing everything he was supposed to be doing in a relationship: introducing girlfriends to his mother, taking them out to dinner, getting them flowers, and speaking with them on the phone as often as he could. He didn’t know what else he could do to desire them the way they deserved and needed to be desired. He also began to have anxiety attacks over it.

“I started praying so much, just saying, ‘God, if you’re really there please, please change me,'” he said, with sadness rising in his throat. “And I just wasn’t hearing anything and … I was getting scared because … I was beginning to feel like I was a bad person for even being, you know, because I tried so hard and I thought, ‘I must just not be good enough. Maybe God cursed me because I’m still the way I am,’ and I was thinking, you know, ‘I don’t want to be here and be bad, so maybe it’s better that I’m not here because you’re so scared of yourself.'”

Finally, worn out, he prayed once again, last year, for God to change him.

“And I was just so surprised at the response I got from what I always knew was God and what I always felt as God guiding me out throughout my life,” he said. “I just felt this response saying, ‘David, you need to stop asking me this. You see, at this point, you’ve been asking for over half of your life now for me to change you when I don’t see anything to change about you. There’s nothing that’s supposed to be changed, you’re the way I intended for you to be, and I don’t see anything wrong with how you are. And you need to understand that. I don’t see you the same way that you see you. I don’t see you the same way a lot of well-meaning people may see you.'”

“And it was the first time I was able to feel love for myself,” the singer said, wiping tears away from his eyes.

“So if you’ve ever felt like you don’t belong because of you being different, I just want you to know that it is worth you sticking around and being here and allowing you to live your life and be happy,” he concluded before eventually playing the aforementioned song.

While Archuleta didn’t publicly mention sexuality or LGBTQ+ identity, he said in June 2021 that he wasn’t sure how to label his sexuality because he feels attracted to more than one gender and also feels asexual.

“I don’t feel comfortable sharing it, but felt I needed to bring more awareness to people in my same situation and let you know you’re not alone. You can be part of the LGBTQIA+ community and still believe in God and His gospel plan,” he wrote to fans.

“I like to keep to myself but also thought this was important to share because I know so many other people from religious upbringings feel the same way,” he added. “I’ve been open to myself and my close family for some years now that I am not sure about my own sexuality.”

18 LGBTQ+ Words added to the Oxford English Dictionary in 2022