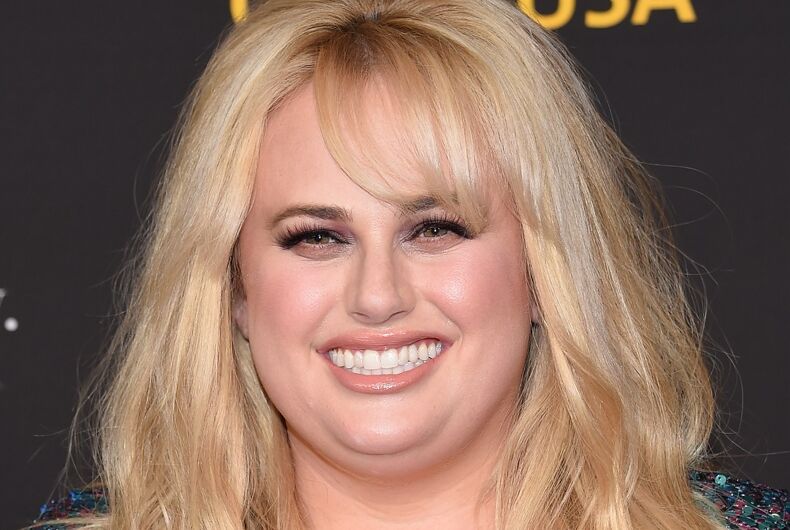 Out actress Rebel Wilson recently opened up about the way her first onscreen kiss with a woman ultimately led to her real-life relationship with one.

Wilson was speaking about her upcoming dramatic film, The Almond and the Seahorse, in which she plays an archeologist caring for her husband after he suffers a traumatic brain injury.

In the film, released December 16, Wilson kisses a woman played by Charlotte Gainsbourg. Not only did the kiss change her life, but it was actually Wilson who suggested the character be a woman in the first place.

“When I first read the script, Charlotte’s character, Toni, was written as a man. I was the one who said, ‘OK, I feel like a woman could play it,'” Wilson told The Hollywood Reporter. “Originally, it was supposed to be Pierce Brosnan playing that character but then schedules didn’t align. I felt that we should open it up to a woman and they offered it to Charlotte. I don’t know why I said that but I just felt it could work.”

She went on to discuss how her kiss with Gainsbourg was her first ever real kiss with another woman.

“I had kind of had a situation with a woman before, not a sexual relationship and we hadn’t kissed or anything. But then the kiss with Charlotte came up. I didn’t think it was that big of a deal or anything. Then, weirdly through kissing her in my professional life I thought, well, maybe I should do that for real in my personal life and see how it goes, which I did.”

That ultimately led her to her long-term partner, Ramona Agruma.

“That was in 2021 and then I met Ramona at the end of 2021. If I hadn’t had the experience with Charlotte or the experience with the other woman, I don’t know if I would have ever met Ramona. Having those experiences opened my heart up to it as a possibility. I’m grateful for those two experiences. It changed my love life completely. It’s such an awesome thing.”

Wilson came out on Instagram this year by posting a photo of herself alongside Agruma.

Wilson’s coming out was controversial because she felt forced to do so after a journalist from the Sydney Morning Herald essentially threatened to out her in an article.

Columnist Andrew Hornery, who is gay, claimed it was not his intention after he sent an email giving her a two-day deadline to respond to his plans to write about the relationship.

In the interview, Wilson also spoke about that difficult situation.

“This was a snarky journalist who had written some terrible articles about me before and I knew he was going to write something that was not positive. I just thought, well, we may as well put something out there. Obviously, we’re not ashamed of it but it was just our awesome thing together and we were slowly telling people on our own.”

“But that made it public and that’s different for me because while I’m in the public eye, Ramona is not. It’s much harder for her and I wanted to protect her. But what that did is, it made us do it more quickly than we would have on our own.”

Wilson has had a big year, as she also welcomed a baby girl via surrogate in November.