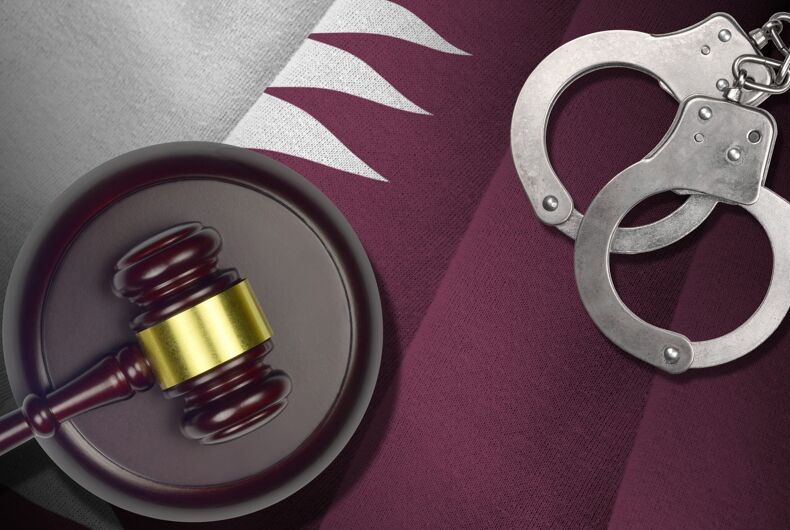 A transgender woman says that Qatari authorities arrested her and then forcibly removed breast tissue from her body for the so-called “crime” of “impersonating a woman.”

Her story, and that of another trans woman who fled the country, highlight the many abuses that LGBTQ+ Qataris face within the country hosting the World Cup soccer tournament.

The woman, identified only as Shahd, showed BBC journalists her haircut which “she was forced to cut into a masculine style,” she said. She also unbuttoned her shirt to show reporters wounds on the top of her chest which were reportedly caused when authorities “forced her to remove breast tissue that had formed since she started taking estrogen.” She obtained the female hormone from another country without a prescription, the publication reported.

“I was arrested and interrogated several times because of my identity. I lost everything,” Shahd said. “I lost my job and my friends.” She said she now lives in constant fear of being arrested and avoids crowded places over worries that others may report her for arrest.

In Qatar, trans people can be detained for “violating public morality,” a broad charge used to harass LGBTQ+ people. Police and members of the government’s Preventive Security Department can then detain and commit physical violence against trans and other queer people for months without having any formal charges or trial, the media outlet noted.

“They capture you and prevent you from telling anyone where you are,” Shahd said. “The prison is underground where they treat you like a criminal.”

Authorities can then send offenders to “behavioral healthcare centers” for forced sessions with practitioners of so-called conversion therapy, the widely disavowed form of psychological torture that purports to change people’s sexual orientations and gender identities.

While the government denies using such practitioners, Shahd said that one told her she would go to hell for her trans identity.

Another trans woman, identified only as Sara, said she was repeatedly subjected to conversion therapy after arrests. She fled the country to apply for political asylum in Europe.

“I was at my breaking point of either committing suicide or leaving and I decided to leave,” Sara told the BBC.

A Qatari official told the media outlet that the government “does not tolerate discrimination against anyone.” But recent reports from Human Rights Watch and Amnesty International refute these claims.

Human Rights Watch documented six cases of severe and repeated beatings and five cases of sexual harassment in police custody between 2019 and 2022.

Arrestees were also forced to watch authorities beat other LGBTQ+ people and to give up their phones so authorities could take screenshots and pursue any of their arrestees’ contacts.

Citizens who try and report government abuses can be charged with trespassing, filming on private property, and publishing “false news with the intent of endangering the public system of the state,” Amnesty International said. Citizen-journalists can have all of their equipment confiscated and be sentenced to three years in prison while being denied access to legal representation or familial support.

Homosexual acts are punishable by imprisonment and death in Qatar, where Islam is the state religion. While Qatari authorities said that World Cup attendees would be free to display rainbow flags at soccer events, police and stadium officials have reportedly been confiscating rainbow flags from fans, ostensibly to prevent them from being attacked by angry locals who oppose LGBTQ+ rights.