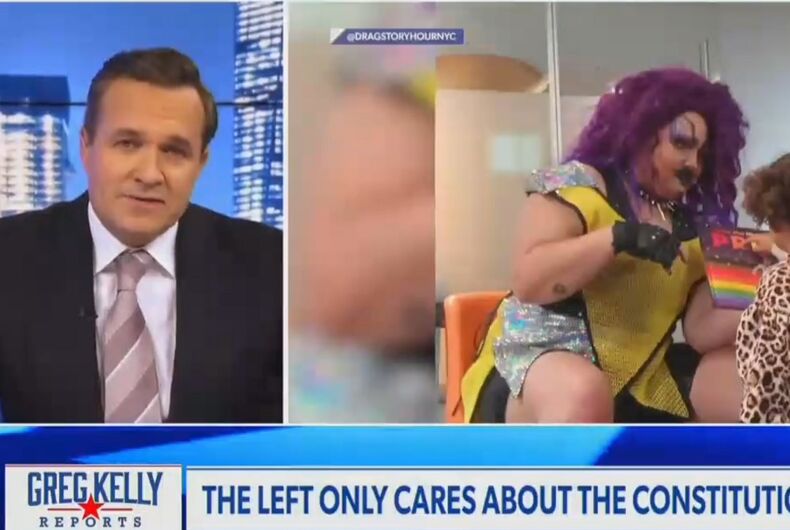 In a bizarre rant, Newsmax’s Greg Kelly went from defending Donald Trump’s call for “termination” of the Constitution to saying that drag queens reading books to other people’s kids is a violation of his constitutional rights.

“How about drag queens reading to children in schools?” he said. “I think that’s a violation of my constitutional rights, even if it’s not my kid.”

Kelly was discussing a message Trump posted to his Twitter clone, Truth Social.

“Do you throw the Presidential Election Results of 2020 OUT and declare the RIGHTFUL WINNER, or do you have a NEW ELECTION?” Trump wrote last weekend. “A Massive Fraud of this type and magnitude allows for the termination of all rules, regulations, and articles, even those found in the Constitution.”

Trump was angry that Twitter deleted information released from President Joe Biden’s son Hunter Biden’s laptop, including a naked picture of Hunter Biden, which he believed somehow cost him the election in 2020.

“So, there’s actually no provision in the Constitution if you find out there was massive fraud, and perhaps the person in the White House doesn’t belong there,” he said. “How do you fix that? Do you set up a new system? Do you set up a new election? Do you wait two and a half, three years until the next election?”

“You know, we do do things external to the Constitution all the time,” he continued. “I don’t like it, for the most part, when it happens. Like, for two years, we were all told we had to stay home and we had no choice.”

Most crimes aren’t mentioned in the Constitution, and somehow laws have been enforced for centuries in the U.S.

Then he turned to drag queens. Instead of saying that because there isn’t anything in the Constitution prohibiting them from reading to kids so they can’t be stopped – to fall in line with his previous example about Arby’s masking policy – he said that drag queens reading to kids violates his constitutional rights.

He did not cite any part of the Constitution that he believed is being violated. Instead, he showed a picture of a fully-clothed drag queen reading to a kid.

“How about drag queens reading to children in schools? I think that’s a violation of my constitutional rights, even if it’s not my kid,” Kelly said. “So there are a lot of things that happened outside the Constitution. And some are really, really bad. And some are supported by RINOs all over the place.”

Newsmax's Greg Kelly: "How about drag queens reading to children in schools? I think that's a violation of my constitutional rights, even if it's not my kid" pic.twitter.com/wiPl4VYlTH

Drag storytimes have faced attacks all over the country and armed rightwing protestors are showing up outside of events with children in multiple states each week. Drag performers are hiring armed security and using metal detectors when they perform due to threats of violence.

Conservatives who once justified Florida’s “Don’t Say Gay” law by saying that it’s their right as parents to raise their children however they want – including preventing their children from hearing that LGBTQ+ people exist – are attacking other parents who take their children to age-appropriate drag shows as if they believe, like Kelly, that a drag queen reading to someone else’s children is a violation of their constitutional rights.

Last year Kelly attacked out Secretary of Transportation Pete Buttigieg, saying that “he’s obviously participating in being gay” and treating it “almost like a full-time job.”

“I could care less,” Kelly claimed.